Pratchett’s Truth Is Out In Perth 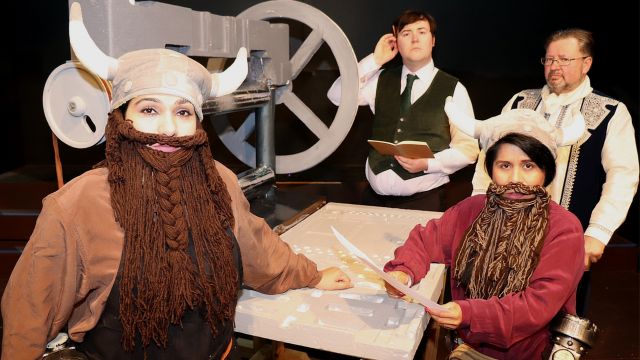 TERRY Pratchett fans rejoice – The Truth is out there – in Perth.

Adapted by Stephen Briggs from the popular Discworld novel, the stage production is coming to the Roxy Lane Theatre in July, presented by ARENAarts and directed by Ron Arthurs.

In The Truth, William de Worde becomes accidental editor of the Discworld's first newspaper with the help of two dwarves.

With plots afoot, possible murder, dog-napping, love in the air – and a potato – the truth will make you fret, rather than set you free.

The late Terry Pratchett was a master of the fantasy genre and sold more than 85 million books worldwide in 37 languages.

“We are not going for the approach taken by many Pratchett productions, which is large showy sets and intricately-built scenes,” Arthurs said. “We have a smaller stage so will be taking a set-minimalist approach and using lighting to move from scene to scene.

“This will also allow audiences to focus more on the action and actors with fewer distractions.

“Theatre isn’t just about the set, it’s about the players and action taking place.

“A couple of characters will surprise the Pratchett fan base and my vision is to have a lot of bright colours, in both costumes and settings.”

Acting for the past 40 years in Australia and the UK, Arthurs first acted as a 10-year-old and has gone on to perform with Moora Repertory Club, Plantagenet Players, Narrogin Repertory, ARENAarts, EdgyX, Harbour, Kwinana, Stirling, Marloo, KADS and Limelight Theatres and the Rockingham Players.

He appeared at the UK’s Stables Theatre and has won various acting awards, after appearing in more than 200 productions. Since mid-2013, Arthurs has appeared in more than 80 local films, the award-winning Fringe World show The Leftovers and has completed voiceover work for The Star War Adventures in the US.

“I am a big fan of Terry Pratchett’s novels and have performed in two stage productions adapted from his plays,” he said.

“I know there is a large following of Pratchett’s works and want to share them and possibly bring others into the fandom.”

The Roxy Lane Theatre is on the corner of Ninth Avenue and Roxy Lane, Maylands.