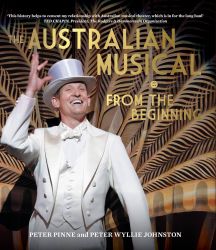 Peter Pinne and Peter Wyllie Johnston have produced the definitive history of Musical Theatre in Australia. This magnificent 418 page coffee table extravaganza details the high and lows of more than a century of stage work.

UNTIL FEBRUARY 20 INCLUDES FREE POSTAGE WITHIN AUSTRALIA, A COPY AUTOGRAPHED BY NANCYE HAYES AM. PLUS A BONUS SIX MONTHS SUBSCRIPTION TO STAGE WHISPERS.

Musical theatre has a special place in the hearts of Australians. Whether it’s The Boy from Oz, Bran Nue Dae or Muriel's Wedding, we love to see Australian stories on the big stage with all the glamour, energy and vibrancy a musical can offer.

However magical they are on stage, performances leave behind few traces. Australia has a rich, hidden history of achievement in musical theatre which is now largely forgotten. Drawing on their long careers in musical performance, and extensive research in public and private collections, Peter Wyllie Johnston and Peter Pinne have compiled a definitive account of the history of musical theatre in Australia.

From small amateur performances in the early days, to international achievements, to the new wave of Australian musicals from the 1990s right through to the explosion of creativity in the 21st century, they recount the emotional roller-coaster of successes and disappointments of one of the most demanding art forms. This masterpiece of a tribute also comes with an authoritative guide to over 300 Australian musicals.

Richly illustrated with colour photos from the early days to the present, The Australian Musical is a book to treasure for years to come, and is an invaluable resource for anyone involved with theatre and music.

CLICK HERE TO SEE HIGHLIGHTS OF OUR SYDNEY LAUNCH.