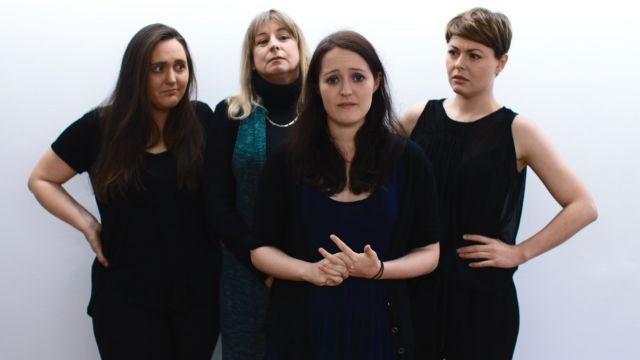 With The Critic, versatile Gabriel Bergmoser gives us a ‘play of ideas’.  The crux of the piece is the very real moral, ethical and indeed aesthetic dilemma of the central character.  It is a dilemma familiar to anyone who reviews any artistic endeavour, a dilemma any reviewer – or the higher status ‘critic’ – confronts with dread: the review of a play, novel, musical composition or artwork created by a friend.  But the dilemma – tell the truth or betray oneself or one’s principles and judgement by lying - is one we all, in our different spheres, face from time to time.

Jamie (Louise Cocks) gets a job as a theatre reviewer for a big metro newspaper.  Naively, she asks her editor, Susan (Angelique Malcolm) if she may review a new play, ‘Purity’, written and produced by and starring her friend Emma (Alicia Beckhurst).  For reasons fundamental to the play’s ideas (such as ‘conflict of interest’), Susan says no.  But, with a bit of a creaky contrivance, Jamie is assigned to review Emma’s play.  Jamie is thrilled that she can boost her friend’s career…  But when she sees the play, with her cynical wisecracking flat mate, Ellie (Rose Flanagan), she realises, to her horror, that ‘Purity’ is a stinker – pretentious, boring, empty.  Conflict – internal and external – ensues.  But no more spoilers from me.

This tight little play – a mere forty-five minutes – gets a very simple, no budget production.  There are no lighting changes, not even between scenes, and no wardrobe changes.  The set is a folding screen, two chairs and a desk and chair; this stands in for the editor’s office, a theatre foyer and Jamie’s apartment.  I doubt that anyone is confused.  There’s not much movement on Club Voltaire’s tiny stage; it’s pretty much ‘stand and deliver’.  Director Ashley Tardy clearly understands what she has on her hands – and the lack of resources – so she focuses on the arguments and rhetoric of the text and keeps them sharp.

It must be said that the text is a little didactic.  Mr Bergmoser is a reviewer himself, so he writes from the inside, so to speak.  The didactic tone, however, means ‘big speeches’, which are finely written per se, but are, still, big speeches and therefore ‘unnatural’.  Ms Cocks has several and Ms Malcolm a couple and both seem to struggle a little – although Ms Cocks rises to a fine level of angry clarity in her final ‘here I stand – I can do no other’ speech.   Ms Beckhurst has an easier time because, as the aggrieved, self-absorbed creative, she can play strong external emotions like anger and shame.  Ms Flanagan has the easiest time of all as the amused cynic, but that doesn’t mean she coasts; her comic timing is very good indeed.

It is rare, nowadays, to see a ‘play of ideas’, but this one is engaging and you may be surprised in the end where Mr Bergmoser comes down and how tough minded he is when he does.