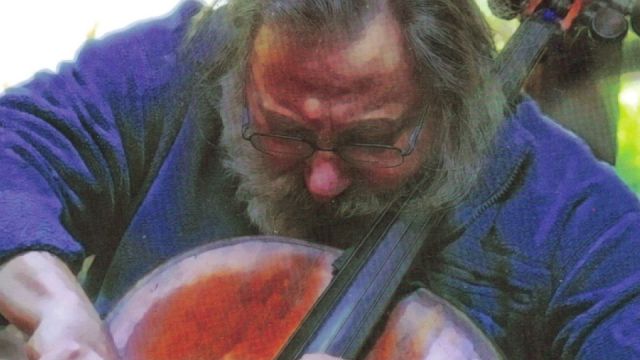 The four works each have a singular, central conceit: Concertino for Cello & Cellist’s Spoken Voice was constructed from five of Kahans’ poems interspersed with cello responses; Elegy Concerto (In Memoriam of Jacqueline de Pré) for Female Actor & Cello is self-explanatory; Suite (Partita) explored voices; and Dialogo is all about fire.

Kahans’ poems served as the driving force behind Concertino, powered by Kahans’ impassioned readings of his texts. His cello responses to each work were soaring chromatic melodic lines punctuated by moments of resonant double-stops. A clear klezmer influence infused “Bernard Madoff, the world’s greatest swindler,” while “Hongkew, Shanghai, 1941” appeared to be constructed entirely from a single tritone.

Inspired by du Pré’s death, Kahan used his instrument’s lack of fixed pitch to great affect in Elegy. Employing motivic construction and development, Kahan grounded himself in enough classical vernacular to avoid distancing his audience, as can happen easily with contemporary compositions.

Actor Kristina Petkovska’s performance was a powerful and thrilling accompaniment to Kahans’ composition. I felt the pre-recorded voice could have been mixed a little higher as the live cello often overpowered it.

The only disappointment of this world premiere was the use of a real cigarette that, coupled with the venue’s operating air conditioner (I didn’t think it was that hot outside), permeated the entire room and left a foul taste in the mouth for the remainder of the evening.

As mentioned earlier, Suite explored both human and animal voices. Mix was once again an issue during “Cat Purr and Cello.” I could hear enough of Someone (Kahans’ cat) to understand the author’s intention, yet a clearer interplay between the sampled and live sounds would have added to the piece.

“Automatic Writing” performed a pedagogical role with Kahan explaining the practice and offering samples of his own writings and that of Kurt Shcwitter and James Joyce.

The final work, Dialogo, was an exploration of musical modes sung unaccompanied by soprano Ingrid Heyn or in duet with Kahans’ cello. Heyn’s intonation was exemplary and the performance benefited from her solid understanding of the musical styles and literature. Surprisingly, with Kahan being such a wordsmith, the final idea (“Black Saturday in 3 parts”) appeared more like a set of vocalizes than songs, using only pure vowels.

Although running considerably longer than the advertised 75 minutes, Four New Works was a pleasurable evening spent watching an aging master enjoy his art.