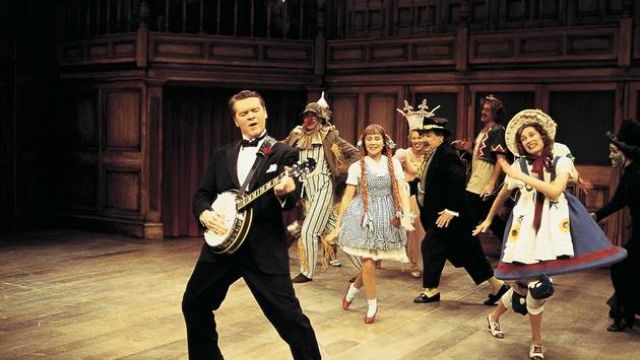 For the past six weeks Andrew Lloyd Webber has made available a filmed version of one of his musicals screening for free over the weekend on the YouTube channel The Shows Must Go On. Last weekend brought us something out of the box and not one of his blockbusters.

The first iteration of By Jeeves, when it was simply called Jeeves premiered in London in 1975, ran a month, and was consigned to the musical-theatre waste bin until Lloyd Webber and his book and lyric writer Alan Ayckbourn took another look at it in 1996, threw out most of the score, reconceived it on a smaller scale, and turned its fortunes around. It played a six month season in London, crossed the pond to Goodspeed Opera House, Connecticut, played Los Angeles and Pittsburg before finally reaching Broadway.

This filmed version was shot in a studio in Toronto, Canada, after the Pittsburgh production. With a few minor changes, it was basically the same cast who opened the musical at Goodspeed.

We’re back in the twenties in the very English world of P.G. Wodehouse, where mistaken identities abound, and characters have names like Gussie Fink-Nottle, Honoria Glossop and Stiffy Byng. It’s set in a village hall and with a piano and bass accompaniment, it’s not unlike the tinkly tunes that (Julian) Slade and (Dorothy) Reynolds turned out in the sixties with a style similar to The Play That Goes Wrong.

The pieces hinges on the character of Bertie Wooster, and John Scherer who played the role was likeable and a talented song-and-dance man. To say the material is flimsy is an overstatement, but the piece has the spirit of the Wodehouse novels and just gets by as an OK, if at times forced, evening in the theatre.

The second half is better than the first. The score, which is far from typical Lloyd Webber, also works surprisingly well with “Half A Moment” still the best number, as it was in the original.

The cast, which included Marin Jarvis as a stiff-upper-lipped Jeeves, Donna Lynne Champlin as a wonderous anyone-for-tennis Honoria Glossop, and James Kall as a hapless Gussie Fink-Nottle, also featured Emily Loesser, composer Frank Loesser’s daughter, as a no-nonsense Stiffy Byng. They all worked hard but the laughs weren’t easy to come by.