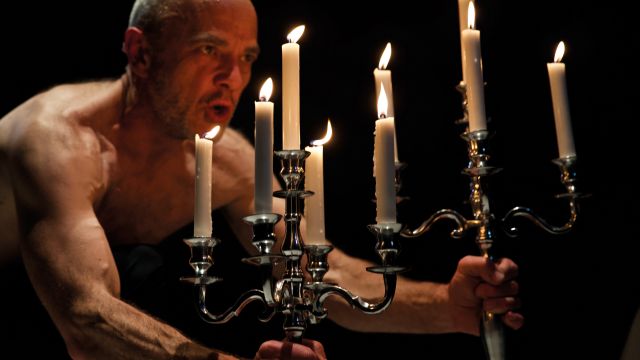 With a closing inference that the nightly news is actually a panacea, Trustees speaks to the politically aware and concerned about some of the most difficult and pressing issues we are grappling with but, arguably, not really doing enough towards rectifying.  It rips open personal experience and expresses desperation about the damage we have rendered and are rendering on each other.   More often than not this is expressed through the use of the human body as metaphor.

The initial premise, Australia’s miserable and competitive funding for The Arts should be discontinued, is presented as a debate. Then we witness the desperation of one little theatre company - The Lone Pine Theatre Company – that loses its financial support, and plots outlandish ways to become self-sufficient.  This troupe, as the name suggests, is a battlefield, a brutal battlefield of ego and ambition.  Through desperation it attempts to find innovative and ridiculously superficial ways to survive.

From here there is a shift into the more subliminal and profoundly problematical.

This is powerful theatre that, although stunning and absorbing, doesn’t feel fully unified in its approach, method or message.  As a collaboratively created piece it is underpinned by the European sensitivities of writer/directors (Natalia Kaliada and Nicolai Khalezin) of Belarus Free Theatre - a highly political underground company that more often then not creates campaign theatre.  Working with Australian Actors over a very short period of time, the result is remarkable. It is most notably a massive expression of the political as personal by the performers. Five disturbing trajectories of personal experience that cut to the bone are honed into riveting intense performance.  All five actors excel. 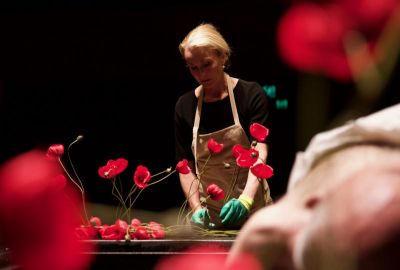 Trustees is a massive undertaking, definitely too massive to be folded neatly and topped and tailed.  It is marvelous Festival fare – a robust powerful, potent, passionate, demanding and challenging work.  Censored is heavy-duty and contentious.

With any luck this extraordinary seminal experience of Australian practitioners working with Belarus Free Theatre, will seed a rich, fruitful and. long lasting legacy amongst some of our innovative contemporary theatre makers.