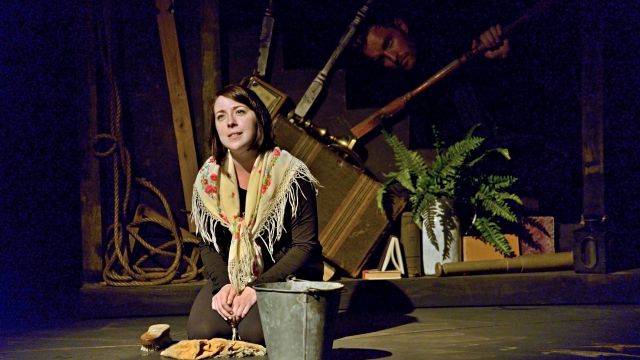 Turning Dylan Thomas's radio play into a visually satisfying drama is a stiff challenge, all the greater in retaining the poetic narration as the action and dialogue unfold; it would be understandable if a director determined the narration and the dialogue to be mutually exclusive. But Duncan Ley's translation of the work to the stage brings it to dramatic life.

Ley's efforts here received the able assistance of narrator Duncan Driver's stage command in unobtrusively directing our attention to the action and infusing it with meaning. Driver's voice, facial expressions, mannerisms, and posture were fine-tuned to assist in connoting multiple meanings in the action as Dylan Thomas would want us to understand it, and made the entire experience entertaining as well as intriguing.

Anne Kay's sets added nice touches to the play's highlighting of human foibles; the exacting lighting was executed flawlessly; the audio was brilliant (though the opening soundtrack was frustrating in being nearly comprehensible); and all actors played their parts to perfection.

The production marks a significant reworking of a classic, and will be one to remember.