Aladdin and the Mysterious Magical Lamp 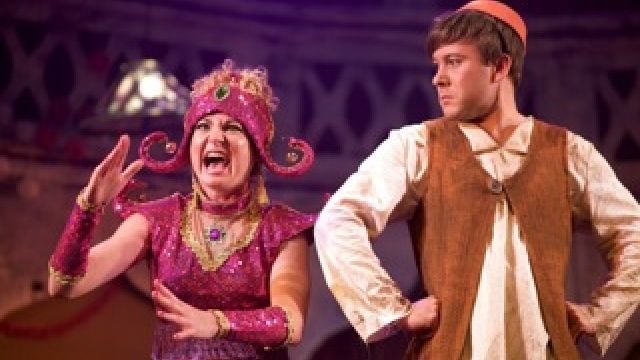 Aladdin and the Mysterious Magical Lampmarks Harvest Rain’s third school holiday production at QPAC, and they have at last perfected the winning formula that makes a children’s pantomime truly fire – high energy, loads of silliness, some clever puppetry, audience participation and plenty of sight gags. 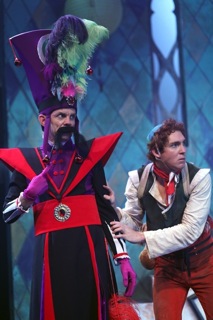 The combination of an experienced versatile cast, and a fun script, helps give new life to this classic tale of Aladdin (played by the charming Dash Kruck) as he ventures into the Cave of Treasures to retrieve the legendary lamp containing the most outrageous Genie of them all.

There are some truly hilarious performances from Bryan Probets as the evil sorcerer Mahoozela Fahoozela; Cameron Hurry as his buffoonish henchman Oozela; and Liz Skitch as Jeannie the Genie.

Music Director Kylie Morris has composed a lively underscore punctuated by frenetic percussive accompaniment, which has the live musicians working their fingers to the bone.
And once again the Harvest Rain design team Josh McInstosh (Designer) and Jason Glenwright (LX Designer) prove they are a winning combination.

This new version of Aladdin is definitely a winner and a theatrical adventure for the whole family to enjoy. Perhaps next year we might even get a Panto Dame!
Paul Dellit