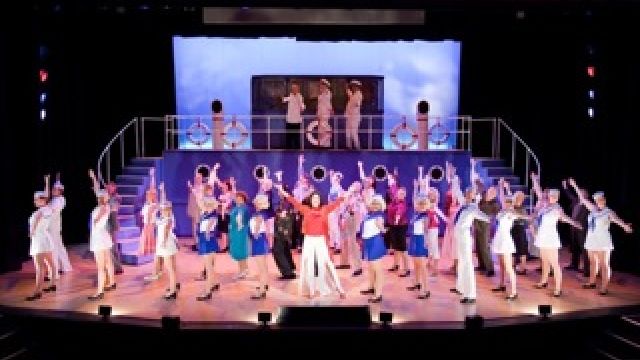 Though the programs and posters (and, presumably, the contract) say this is Cole Porter’s Anything Goes, in fact the marvellous Mr. Porter is responsible for only a minor percentage of the show’s content — say, 30%. His famous melodies and consistently brilliant lyrics continue to delight; it’s the other 70% that is the challenge.

P.G. Wodehouse, the comic genius who created Bertie Wooster, and Guy Bolton wrote the farce that linked the songs in the 1934 Broadway original. Trouble on the road brought in two extra writers, Russel Crouse and director Howard Lindsay, who tailored the vaudeville goings-on to the comic specialities of the cast. The show was a Depression-busting smash. Revived in 1987, it had a ‘New Book’ by Timothy Crouse (son of Russel) and John Weidman. Several songs were borrowed from other Cole Porter shows.

Set on board a 1930s Atlantic liner sailing ritzy (and not so ritzy) passengers from New York to London, the creaky drama-free plot requires multiple mishaps, impossible mistaken identities and much desperate mugging. Without a raft of seasoned comedians the show can be tough going and the Gosford audience sighs with relief when the next great musical number arrives, especially if the company’s smart troupe of tap dancers is included.

It seems a terrible shame to hide the nifty orchestra so completely.