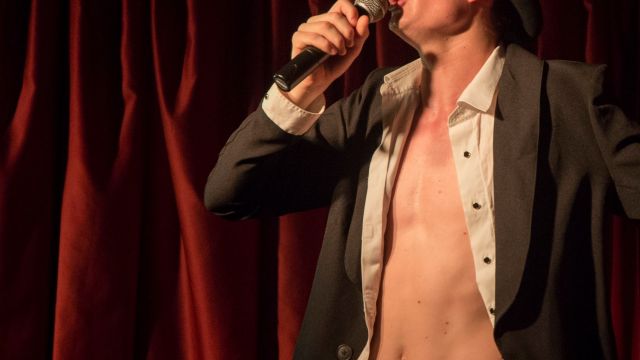 Florian Korty has devised a fast paced, funny and poignant cabaret show based upon his own story of a young gay man travelling from his small home town in Germany to Sydney – the glittering LGBTQ capital of the southern hemisphere. Upon arrival he’s somewhat surprised, but very pleased, that there’s not a kangaroo to be seen in Oxford Street or Newtown.

Much of Florian’s story is explored through his recitation of his letters home to cousin Katja. He tells tales of discovering Sydney and its bath houses, bars and cabarets. And the men. Ah, the men. He falls in love, is disillusioned, but ultimately finds his true self. Sydney becomes his new home. Much of his journey is illustrated through song. Florian performs many standards, such as Dietrich’s ‘Lili Marlene’, Piaf’s ‘No Regrets’ and Minnelli’s ‘Cabaret’, together with a range of contemporary songs.

Florian works hard delivering this tales and songs and Clare Heuston’s musical direction and piano accompaniment heightens the atmosphere of live cabaret. But at times Florian struggles to deliver the power and range of the masters of this form. He’s tackled a major challenge and he works hard at mastering it. I’ll look forward to seeing more of this young man as he develops and matures.