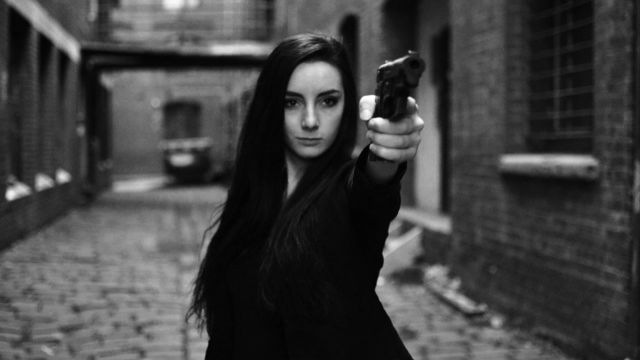 By Gabriel Bergmoser. Bitten By Productions. The Butterfly Club. Sundays until Sept 13, 2014.

Set in a dysfunctional future time Jericho wakes in his hotel room to find a stranger, Clara, holding him at gunpoint and demanding to know why she should not kill him. He has been declared to be useless to society and, as an enforcer of the ruling cartel, she has been sent to eliminate him.

This two person thriller written and directed by Gabriel Bergmoser explores the question of a person’s worth in a society running out of resources to feed a growing population.  Beyond Babylon has Jericho and Clara playing “lifeboat” - justify your existence or be killed.

Dhania McKechnie (Clara) and Finn Gilfedder-Cooney (Jericho) do a great job in keeping the audience glued to their seats as the battle for survival is played out both verbally and physically on the tiny stage of The Butterfly Club. The final resolve exposes just how more complex and dangerous the game was.

The staging of this drama in a tiny theatre, up multiple flights of stairs in a building accessed by a back lane, was perfectly in keeping with the tone of the piece. Staging was simply 2 chairs and a table in front of a well worn velvet curtain and it became a seedy hotel room. Lighting was simple and stark, again perfectly matching the work.

Beyond Babylon is edgy, dark and thought provoking. It would make a terrific film.