The Boy From Oz. 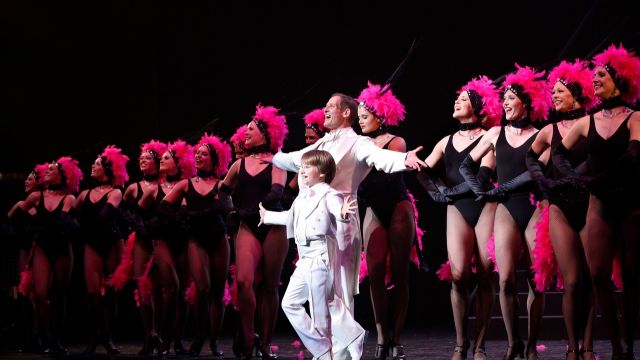 Having seen and loved the superb original Australian production of The Boy From Oz, I am still thoroughly entertained by the latest, somewhat scaled down version. There are, indeed, moments of absolute surprise and delight among the joys of revisiting an old favourite.

Todd McKenney reprises the part of Peter Allen, which he created in 1998, and has really grown and matured to a inhabit the persona of Peter Allen even more completely. Physically, the qualities that made his 1998 portrayal so extraordinary remain, and, truly, moments like his effortless glide across the stage and piano-top manoeuvres draw gasps of wonderment. 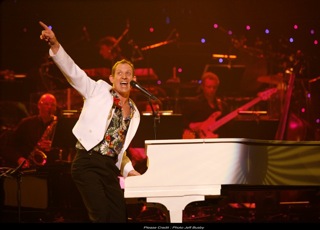 The Radio City kicking line that opened Act 2 was dance precision at its best. I’ve never seen better. While this was the highlight of the wonderful work of the ensemble, it was indicative of the superb drill and joie de vivre they brought to the show throughout.

While I’d love to see The Boy From Oz staged with full bells and whistles again one day, it is one show that adapts well to the minimalist black steps of Production Company stagings. A cyclorama of twinkling stars and an array costumes ranging from technicolour to glittering do the rest.

Congratulations to the Capitol Theatre management on bringing one of The Production Company’s presentations to Sydney audiences.

We can only hope the initiative is repeated. Melbourne has been enjoying three of these encore musical theatre stagings a year, featuring our best musical theatre talent, for more than a decade.

Before Bette Midler performed the final song of her “Kiss My Brass” concert in Sydney in 2005, she told us that Australia had been responsible for the gift to the world of some of the best songs she had ever sung. Then, as the stage became awash with pink, Ms Midler sang Peter Allen’s Tenterfield Saddler. Ms Midler is always at her best with a thoughtful and considered ballad, and her performance of this iconic Allen tune was perfection. 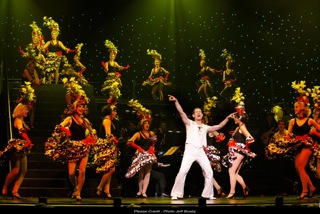 And on Wednesday night, as we filed out of the State Theatre having witnessed the opening night performance of the Production Company’s The Boy From Oz, I overheard someone say “just perfect” … and how right they were. Great performances of theatre sometimes appear to take place inches above the stage, not on it – such is the unquestionable dynamic certain ensembles of performers bring to the presentation of their craft.

Blessed with an amazing script by the great Nick Enright, Nancye Hayes’s direction is all pure theatrical animal instinct and the tableaus that meld her vision of the show together are stunning. The fluidity and precision with which this enormous undertaking moves across the huge State Theatre stage is seamless, and Ms Hayes fills the stage with immensely beautiful stage pictures, painted with people, that – at times – are just breathtaking. Andrew Hallsworth’s sensational choreography is faultless and delivered with great vigour and passion by the never less than outstanding cast.

And what a cast! Christen O’Leary and Fem Belling have the unenviable task of bringing Judy Garland and Liza Minelli to life, respectively, and both manage to do so with considerable impact. Robyn Arthur was divine as Allen’s mother Marion Woolnough, and her show-stopping, tear-inducing performance of Don’t Cry Out Loud was magic. David Harris was equally divine as Allen’s lover for 15 years Greg Connell, owning I honestly love you with a show-stopping interpretation that was so good and so beautifully performed, that it was as though the song was existing for the very first time. Fletcher O’Leary (one of the two boys who will play Young Peter throughout the season) gave the performance of a seasoned veteran, and his melding with the older Peter in the recreation of the famous Radio City Music Hall Rockettes kick-line was yet another show-stopper. Wonderful support was provided by the razzle-dazzle trio of Claire George, Samantha Morley and Sun Park who, apart from being very handy with moving the white grand-piano, also conquered the vocal demands with artful precision and flair. 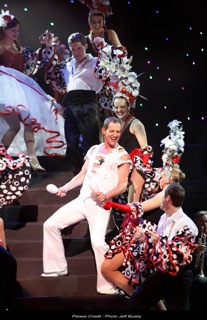 Musical Director John Foreman championed the big, challenging score into one dazzling unit and his band, including members of Orchestra Victoria, was the best it is possible to be. In Music Theatre, there’s an unspoken anxiety in the relationship between the music, the work and the audience. It’s that moment when an instrument slips out of tune or off the beat. It’s that tempo that trips over itself or drags. It’s that startled cringe when the magic and slippery bond that unites great ensembles of musicians falls away. But not here. Mr Foreman and his band were in complete command, and the result was electrifying, particularly much of the tempi which showcased not only Mr Allen’s fantastic tunes, but powered the work of the entire company. From the complete Broadway tuner When I Get My Name In Lights to the intricacy of every heartbeat of Quiet Please, There’s a Lady Onstage, Mr Foreman and his band were pure trust, and more perfect than the greatest expectation.

Shaun Gurton’s impressive and marvelously versatile set design served the work at every turn and Trudy Dalgleish’s lighting of it was brilliant. Kim Bishop’s wonderful costumes brought the showmanship and the pizzazz to life beautifully, but also served to reinforce the era in which Peter Allen lived – a life of such immense passion, dedication and total commitment to the pursuit of his dreams.

Some performers are simply perfect for a particular role – and Todd McKenney brings Peter Allen to life as though they share every piece of one another’s DNA. McKenney’s is a must-see performance of music theatre fire, passion, artistry, flair and great intelligence. Quite apart from the fact that he rarely leaves the stage (and only then to change into another of Mr Allen’s signature outlandish shirts), Mr McKenney reads every beat to perfection and is so alive to every nuance of his character’s journey through this thoughtfully structured show, that at times, it becomes quite overwhelming. When the archival footage of Mr Allen playing the piano and singing Tenterfield Saddler is projected onto a large screen that descends from the fly tower, Mr McKenney sits on a step and watches him with such admiration and understanding that it becomes an incredibly powerful moment of pure pathos – the kind that is only possible in the theatre when ‘theatre people’ are doing what they do best.

And it’s hard to imagine a better example of it than this.