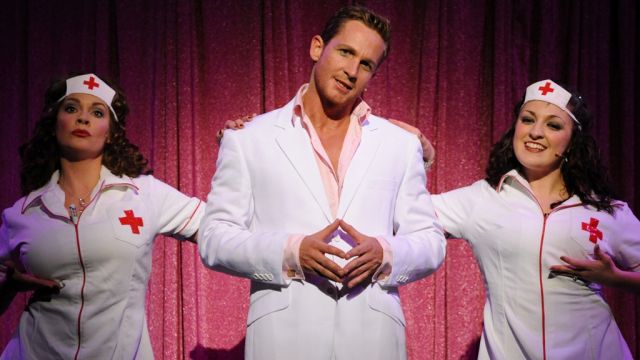 Breast Wishes, which is sub-titled “An Uplifting Musical,” is just that – Uplifting, and joyous, and funny, and ultimately moving. Based on an idea by Actress Anna Looby, this celebration of mammary glands and all that happens to them during a woman’s life, hits its target audience with a whopping great big bang. The ensemble cast couldn’t be better. Valerie Bader as the mother Helen and the bra-fitter Irene, lands every laugh, as does Anna Looby as the self-centred daughter Carol, but it’s Chelsea Plumley as Lyn, the cancer survivor who tugs at the heart-strings. Good support is given by David Harris, the token male, and newcomer Gretel Scarlett. At times the script feels like a stand-up routine, understandable since Wendy Harmer is one of the writers, but it works. The music is original – not TOO original – with a 60s retro sound, but musically it pushes all the right buttons; accordion for the quasi-French “Le Bien Etre,” Latin for the sultry “Mills and Boon and Me,” and a 6/8 opener that could’ve come from Noel Coward. Jason Langley’s direction keeps it moving (it’s only 90 minutes long), and Michael Tyack leads a tight on-stage three-piece combo. In recent times we’ve had Menopause, and Bustin’ Out, aimed at the same audience, but Breast Wishes is by far the best of the three.
Peter Pinne