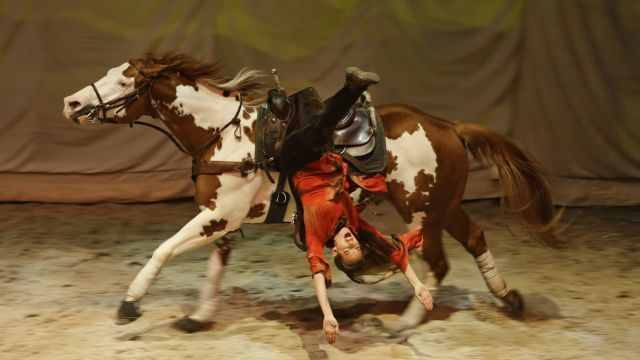 Breathtaking in its Olympian equestrian skills, Cavalia, a celebration of the relationship between man and horse, galloped into Brisbane last night on the first leg of its Australian tour. With a cast of 42 horses and 36 riders, aerialists, actrobats, dancers and musicians, they brought a new dimension to the art of horsemanship, with a show that also embodied trapeze, rope-twirling, trampoline and bungee jumping. The displays of bare-back riding throughout were thrilling. 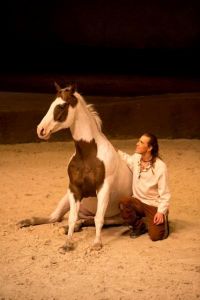 Against a 50-metre wide backdrop of constantly changing digital images, the tableau created at times had the feel of the Spanish Conquistadors, and at others of Elizabethan grandeur. It was very European. The scenes of autumn with the gently falling leaves, was elegiac, likewise winter with its magical mist of snow.

Musical accompaniment was by a live guitar and percussion-heavy four-piece group with occasional interludes of brilliant cello work by Anne-Louise Gilbert. But above all, it was the horses, magnificent and regal, playful and proud, that won the audience’s heart.

Cavalia is a second-cousin to Cirque du Soleil, which is not surprising seeing it was created by one of the co-founders of that phenomenal franchise, Norman Latourelle, and for those who love their shows, it will not disappoint. Created in 2003, the work has already been seen by over 3.5 million people in Europe, North America and Mexico.

Australia has a rich history in its love for all things equinine and this show with its spectacular visuals and riding skills covers all bases as great entertainment.