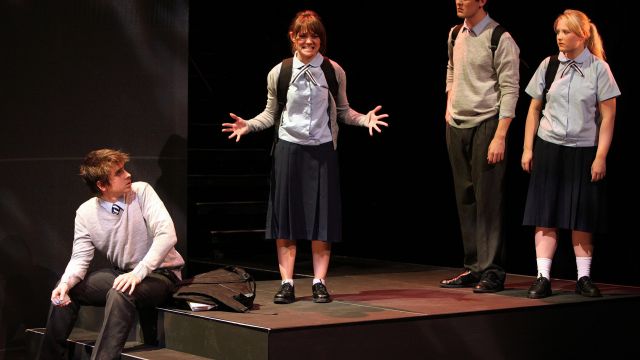 Dirty Apple is a riveting piece of music theatre. Developed by young people, for young people, it’s a bold and gritty take on technology, peer pressure, and cyber-bullying. It’s almost like watching reality TV on stage. Four high school students, pissed at their music teacher for failing them, create a false webpage calling him a pedophile. When he commits suicide the blame game tears the tight group of friends apart. All four principals were terrific, especially Millica Ilic as Emma, the girl whose conscience finally gets the better of her. Jordan Pollard and Kristian Roche were believable as Ben and Ryan, and although Kiandra Howarth made Josie a memorable bitch, vocally at times it was difficult to understand her. 21-year-old Composer Jonathan Henderson’s music was melodic and accessible, and Shaun Charles’ libretto, although repetitive at times, had the ring of authenticity. I didn’t totally believe that all perpetrators had taken responsibility for their actions by the end of the opera, but I guess a muddied resolution is more real in today’s world. Michael Fucher’s direction didn’t miss an emotional beat, and Sharka Bosakova’s set and costumes added greatly to the production. Dane Lam tightly conducted an orchestra of fifteen made up of young musicians from the Queensland Conservatorium Griffith University, and a chorus of ten did good work as the other students. For some performers it was their first time on a professional stage. They all showed a highly commendable level of expertise. I left the theatre excited and moved by the experience. The young company proved beyond a doubt with this production, that the future of opera in this country is in very capable hands.
Peter Pinne