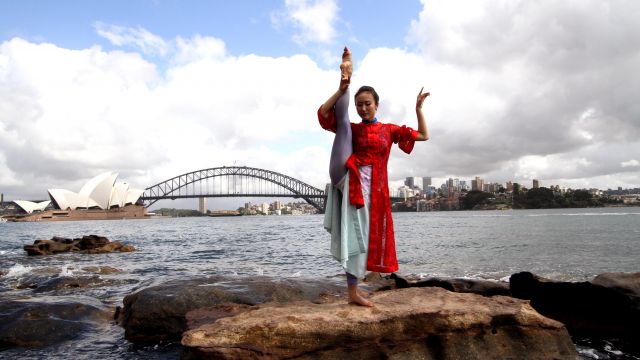 Last Wednesday night, the State Theatre was packed seat for seat by Sydney’s Chinese-Australian community, who all rocked up in high anticipation for the China Wuxi Group’s much acclaimed production of Embroidery Girl.

The ballet depicts the final years of the Qing dynasty, coming into the early years of the Republic of China. It is the tragic love story of a young girl who has mastered suzhoe embroidery, and the love of her life, a young painter. Together they fight for liberty under a new strict reign, both driven by their love for their art. The story spirals into tragedy quickly, sure to captivate the audience, as it did me.

Since it premiered in 2011 in China, this show has celebrated immense success internationally, carrying it years later to Australia where it has recently enjoyed two sold out Sydney shows, then met with a similar reception in Melbourne. Though, as I said, I was captivated and entertained the entire way through the show by a terrific story and stunning dancing, I am a little lost as to the reasons Embroidery Girl has been as successful as it has.

The dancing itself was for the most part fantastic. Zhang Yashu, who plays the show’s heroine Xiu Niang, carried the weight of the audience’s eyes the entire time, making her way through difficult leaps, controlled stances and lifts with so much ease that it’s hard to imagine the same moves acting as climaxes in other dance-oriented shows (as they do). When the music failed to portray exactly the emotions that the plot asked for, Yashu’s timely facial expressions kept her fans, me being one, understanding and sympathizing the whole way through. A real asset to the show, Yashu deserves every ounce of the overwhelming praise Embroidery Girl has been given.

Other leads accompanying her on the stage had shining moments also. Most notably, Tang Chenglong (Hua Jue) demonstrated for all to see the vast list of dancing credits to his name. Liu Xin (Ming Xuan) rose up to his role’s high demands, always competently matching and challenging Yashu’s place as the leading role during duets.

Despite the constant presence of these immense talents I was underwhelmed  by the production. There were several moments when group movements distractingly lacked synchronicity This is perhaps the result of the ambient, string-based and not percussive, music. It wasn’t the sort of music to inspire group dances. It did, however, enhance individual dance scenes.

Perhaps my criticism should focus on the delivery of the music rather than the score. Live music isn’t fundamental to good ballet, but when recorded music is interspersed with poorly cued sound recordings, such as the loud and brief ‘splash’ when our heroine falls into the water, it’s hard not to be disheartened.

Sets and costuming all worked appropriately in the context of the story, with respects to Zhang Jiwen, the show’s stage art designer, and Li Ruiding, the costume designer. It would, however, have been nice to see something more creative in particular regards the lotus painting prop, which is supposed to be a central part of the show’s aesthetic.

In my experience, Embroidery Girl encompasses great talent, but has been poorly executed.