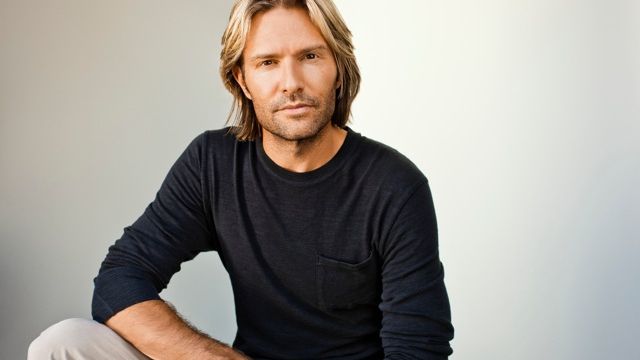 Eric Whitacre is a Rock Star in the world of choral music - he is good looking, with a mane of beautiful shoulder length hair and moves with the grace of a ballet dancer. He is a composer and conductor, has a Grammy, and chart topping albums, and is a gifted orator and has created a ground breaking Virtual Choir.

On his debut in Australia, his arrival onstage is met with enthusiastic applause by the audience, the majority of whom are already followers. He moves to centre stage to conduct the choir and the hall is immediately filled with the beautiful voices of the Choir of Trinity College from Melbourne University (Lux Aurumque). Then Eric Whitacre moves to the microphone and mesmerises the audience with his beautiful mellow tones and witty banter. Hearts are broken as he acknowledges his wife and son in the audience - she had written the Hebrew poems which he has put to music and will now share with us (Five Hebrew Love Songs). 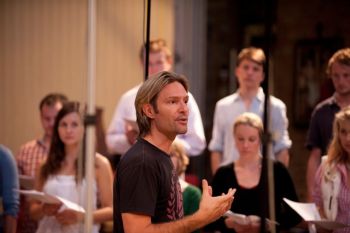 He graciously invites the composer of the next piece, Michael Leighton Jones to conduct the choir (My true love hath my heart), and then reappears to conduct“Come Sweet Death”, which has a unique ending as each chorister can finish in their own time. Then followed a series of songs each with an engaging back story, an anniversary gift for his wife (This Marriage), an opening song for an animated feature film that was never made (The Seal Lullaby), a series of witty songs with words by Ogden Nash (Animal Crackers), and an advent offering inspired by his move to the cold weather and architecture in England (The Chelsea Carol).

The second half saw the arrival onstage of the Monash Sinfonia – the premier string ensemble of the Monash University Sir Zelman Cowen School of Music, directed by Australian violinist Elizabeth Sellars. Eric Whitacre’s haunting choral melodies are seamlessly transformed into orchestral works for this fine ensemble. “A Boy and a Girl” and “Water Night” sing out through Robert Blackwood Hall, and in “The River Cam” the Monash Sinfonia is joined onstage by David Berlin, principal cello of the Melbourne Symphony Orchestra.   The final song is ”Sleep” and the Choir reappear and sing with the Sinfonia to a delighted audience. Sustained applause resulted in a witty rendition of Waltzing Matilda as a final encore.

This was a beautiful, witty, engaging performance and I am sure there will be many audience members keen to see Eric Whitacre return to again share his unique talents.