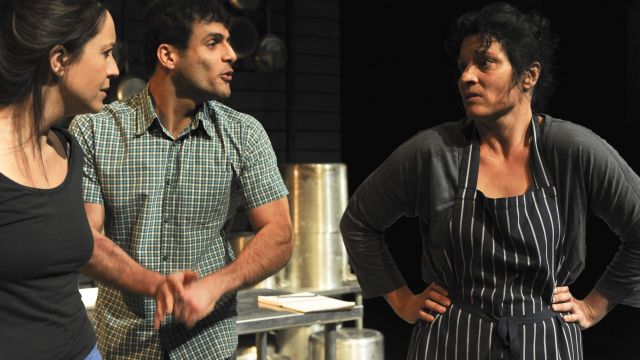 It all happens in a kitchen, but Food is not a culinary experience.  It’s about another kind of sustenance.

Sisters Elma (Mel King) and Nancy (Emma Jackson) run a kind of roadhouse truck stop.  Chips, pies and Chiko rolls.  The food is bad and the sisters are miserable.  Elma – the elder – is defeated, resigned and short-tempered.  Nancy can be pretty snippy too  - but she can also tease by playing the dumb kid sister.  Nancy longs to escape (beautifully and economically shown in the opening moments), but she won’t.  She’s loyal and, anyway, where to?

Instead, Nancy combines nostalgia with an urge to make their lives better – or at least different.  Why doesn’t Elma cook the old dishes she was so good at?  Corned beef and that sorta stuff?  Nancy means ‘family comfort food’ – a small irony since it seems Elma and Nancy never had what you might call ‘family’.  Anyway, if they’re going to do that, they’ll need a kitchen hand.  Elma resists, but there’s enough spark left in her to have a go.  Enter Hakan (a sprightly, funny performance from Fayssal Bazzi), a young, irrepressibly cheerful Turkish motor mouth.  Elma is more than dubious, but as Hakan is the only applicant…

By now, you might have an idea where this is going, but you would be only partly right.  Yes, the roadhouse becomes a success, but Hakan is not a chef hiding his Turkish cuisine under a bushel.  Yes, he is a catalyst – but also an advertent healer.

Foodis a play where the backstory is full of dark drama – the sisters’ mother was a feckless party girl and the sisters were victims of abuse – but what we see is the aftermath, the women living with their wounds, told to us and to each other in the most matter-of-fact way tempered by incredulity – as in, ‘did that really happen?’.   There are times here when, with a cast of three, developments in the present have to be narrated to us too.  But Food is a ‘feel good’ show – a paean to resilience, endurance and ‘giving it a go’.

Anne Tregolan’s set is simple – as befits a touring production – it’s the roadhouse kitchen and cool room, but uncluttered by too much naturalistic detail and given texture by a wall of pots and pans.  Martin Langthorne’s unobtrusive lighting and sound complement the design and the action.

Mr Rogers co-directs with Kate Champion, who has won awards not just as a performer but also as a choreographer.  Her skill is evident in the cast’s movements, dances and physical interactions – heightened and stylized, but as expressive as the words and delightful to watch.   To see what I mean, have a look at this video.

Yes, Food might be called ‘predictable’, even verging on formulaic, but Steve Rogers (twenty years an actor himself) writes with clarity and insight.  His characters – embodied and amplified by the cast – have warmth, depth and complexity.  Hakan’s gauche but sweet attempts to please and to fit in add a level of crazy humour.  The transition from depression and doubt to wild success comes a little too quickly and easily, but as the actors race about the theatre, serving soup, bread and wine to the audience, they engage us in their characters’ happiness.  There may be a missing beat at the play’s end when something the audience almost certainly expects doesn’t happen  – but the audience didn’t seem to mind – they’d had too good a time.