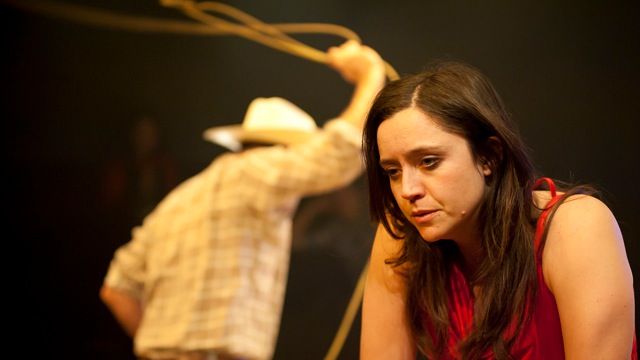 I can’t testify to the bedbugs, but in every minute detail, the cheap, depressing motel room seems perfect, and utterly desolate. In an ideal matching of play to space, the intimate Downstairs theatre makes the grimy no-star motel room setting confrontingly claustrophobic. It’s spot on for Shepard’s down and out American West drama. Absolute consistency of accent, fierce, brutal physicality, and detailed mundanity, down to toenail clipping, all build the credibility of this bleak reality.

In a murky narrative of obsessive, incestuous passion, Eddie (an itinerant rodeo rider) has travelled two thousand miles across America to reignite his long-term on again – off again relationship with half-sister May, now trying to establish a life of her own. Perched above and to the side of the stage, Terry Serio, their spectral father, provides a gravelly country and western commentary. Eddie waits menacingly to confront May’s date. It’s fierce, fiery and highly charged.

The love-hate-lust relationship between May and Eddie sparks with dark electricity, while as the new boyfriend, Alan Flower is like a startled animal caught in the headlights.

Lighting Design by Verity Hampson, and the contributions of Video Artist Mike Daly and composer Terry Serio, blend seamlessly with Designer Michael Hankin’s set and costumes to evoke and heighten the forlorn, drab world of the play.

Harsh, absorbing, relentless, and agonizing in its human truth, this is among the best productions of Shepard’s style of ‘trailer trash’ drama I’ve seen on a Sydney stage.