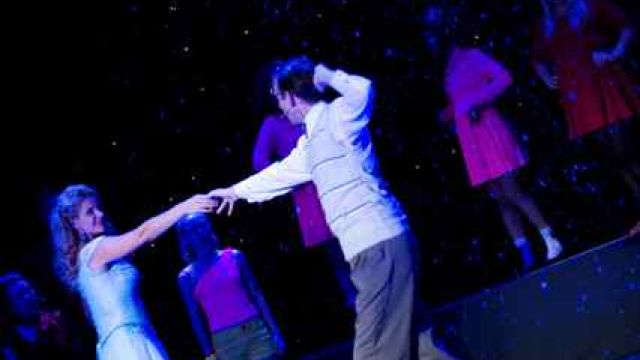 Set and costume design by multi-awarded Josh McIntosh, Jason Glenwright’s lighting supporting him, choreography by Leah Shelton, sound design by Owen Forsyth, and the mainly-interpolated music in the hands of Luke Kennedy and Michael Manikus ─ this company aimed for top technical support, and they got it. Together they made magic happen: it snowed, onstage and over front rows. (Patrons were forewarned!)

This new South Brisbane $3M Edmund Rice Performing Arts Centre with a 1500 seat capacity (bigger and more leg room between rows than any of the QPAC theatres!) is a great new addition to cater for ‘big’ touring shows. SNOW effectively displayed the versatility of the fully equipped sound, lighting and staging possibilities.

What a wonderful opportunity for young performers with stars-in-their-eyes to play in the annual pre-Christmas presentation St Laurence’s College plans annually.

One gripe: the script is overwritten and vocabulary is aimed at far-too-high a level for the target audience. Author/director, Daniel Evans, overcame this by diverting us with dynamic spectacle.