Live from the London Stage! 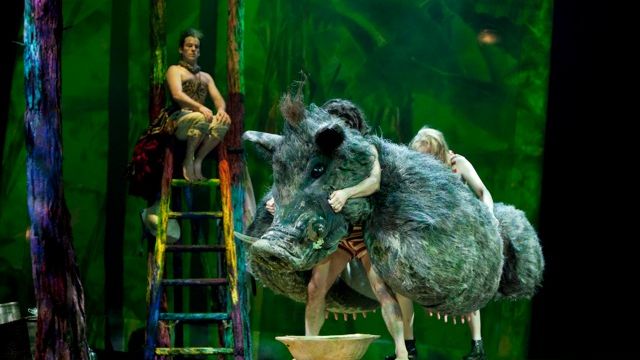 Red at the Donmar Warehouse, Six Degrees of Separation at the Old Vic and the National Theatre's live international cinema broadcast (including Australia) of Nation on February 13 and 14.

RED - a new play by John Logan at the Donmar Warehouse

Set in abstract artist, Mark Rothko’s New York studio in the 50’s, this powerful two-hander featuring the artist and his young assistant Ken, is one of the most compelling plays Ive seen in a long time.

Beautifully written by John Logan, (award winning author of Gladiator, The Aviator, Last Samurai), Red is a moving and incredibly convincing account of Rothko’s struggle to find his place in the history of art.

Alfred Molina who plays Rothko, is an imposing presence with his shaved head and bullying ways. The fierce intensity of his performance, his rantings and ravings about life and art allow us into the inner turmoil of the artists complex mind. As he works on his largest commission yet - a set of murals intended for the Four Seasons Restaurant in Manhattan, we see that his self obsession and egotistical self importance will never allow him to release these paintings to a restaurant full of vacuous diners. He returns the fee and keeps the paintings.

As Ken, Eddie Redmayne plays an initially meek assistant who ultimately astounds us with the courage to stand up to the stinging sarcasm of his boss.

Michael Grandage’s direction is superb, aided by the fabulous set designed by Christopher Oram. There’s a wonderful scene where the pair prime an enormous blank canvas, slapping on red paint together in a mad frenzy and ending up like blood splattered warriors. Simply a brilliant piece of choreography by Grandage,

A great production, I loved it.

Six Degrees of Separation by John Guare at the Old Vic

First a play, then a movie, now revived again as a play by The Old Vic, Six Degrees of Separation is loosely based on the real life story of a New York conman, and tells of deception, fraud and theft.

When a well-dressed young black man called Paul, bursts into the wealthy Kittredges Manhattan apartment claiming not only to have been mugged, but also the son of Sydney Poitier, the ball starts rolling in this slightly disjointed, hard-to-believe play.

Paul seems to know the Kittredges children from college, and promising them roles in his fathers film version of Cats, this art dealer couple on the verge of making a fortune, are seduced into giving him a bed for the night, money and friendship.

Its not until they catch him with a rent boy (both gratuitously naked on a couch then flaying around the stage) that the deception is exposed.

While Obi Abili as Paul and Lesley Manville as Ouisa Kittredge are watchable, the rest of the 16 strong cast including Anthony Head as Flan Kittredge, are unremarkable. Although the play buzzes with ideas of identity, celebrity and class division, the script is not succinct and there are too many unnecessary characters to keep you riveted.

A live performance from the UK’s National Theatre broadcast to 330 cinemas worldwide, including Australia on February 13 and 14.

A spectacular family production of Terry Pratchett’s NATION filmed live at the National Theatre in London will be broadcast by satellite to cinemas worldwide reaching Australian audiences on February 13 and 14.

Adapted by Mark Ravenhill and directed by Melly Still, NATION is an exhilarating adventure story of survival and self-discovery featuring live music, dance and extraordinary puppets, suitable for ages 10 and above.

NATION is set in a parallel world in 1860. Two teenagers, Mau and Daphne, are thrown together by a tsunami that has destroyed Mau’s village and left Daphne shipwrecked on his South Pacific island, thousands of miles from home. Mau is a young black boy, Daphne a young English girl; neither speaks the other’s language; somehow they must learn to survive.
As starving refugees gather, Daphne delivers a baby, milks a pig, brews beer and does battle with a mutineer. Mau fights cannibal Raiders, discovers the world is round and questions the reality of his tribe’s fiercely patriarchal gods. Together they come of age, overseen by a foul-mouthed parrot, as they discard old doctrine to forge a new Nation.
Terry Pratchett is one of the UK’s best-selling authors, whose work includes the Discworld series of 36 novels. In total, his books have sold over 60 million copies in thirty-seven languages. Terry Pratchett has won numerous literary awards including the Carnegie Medal; he was knighted in the 2009 New Year’s Honours List. Nation was published in 2008 and was longlisted for The Guardian Children’s Fiction Prize for 2009.
The cast of NATION is led by Gary Carr (as Mau) and Emily Taaffe (as Daphne), and also includes: Gaye Brown, Paul Chahidi, Elaine Claxton, Adrian Decosta, Mike Denman, Lorna Gayle, Howard Gossington, Tony Hasnath, Robert Hastie, Michelle Lukes, Nick Malinowski, Michael Mears, Itxaso Moreno, Al Nedjari, Bhasker Patel, Nicholas Rowe, Sirine Saba, Craig Stein, David Sterne, Jason Thorpe and Nancy Wei George.

The Olivier Theatre production is directed by Melly Still, who also designs the set with Mark Friend; with costumes by Dinah Collin, lighting by Paul Anderson, projections by Jon Driscoll, music by Adrian Sutton and sound by Paul Arditti.

For a full list of participating locations and ticket information visit www.ntlive.com