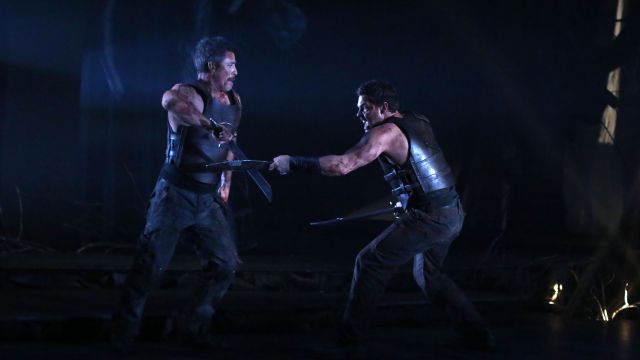 This brilliant, accessible production is played passionately with crisp and carefully articulated dialogue that engages any audience. (Remember, Shakespeare wrote for an audience over half of whom were illiterate). Michael Attenborough inspired many of our finest actors to elicit performances worthy of any world stage All rose to the occasion. 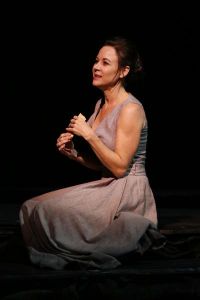 The show burst onto the stage from a blackout accompanied by Phil Slade’s terrifying sound score, and a mystical primordial forest set (Simone Romaniuk, designer) that David Walter’s ingenious and ground-breaking lighting design revealed. The witches (Ellen Bailey, Lauren Jackson and Courtney Stewart) emerged, sluglike from an underworld, writhed and intertwined (choreography: Nerida Matthaei) to deliver their prophesies. That set the plot in action.

There is dirt, blood, violence and action aplenty in some heart-stopping fights and murders (fight director: Nigel Poulton), carefully rehearsed and realistically realised by the actors.

I am reluctant to isolate other actors from this superb two-company combination because it would destroy their ensemble structure.  But I must acknowledge the Queensland Government’s special grant that enabled these two companies to engage Michael Attenborough to direct this production. His influence will flow down now through two of our top companies and establish a standard to which they should all aspire.