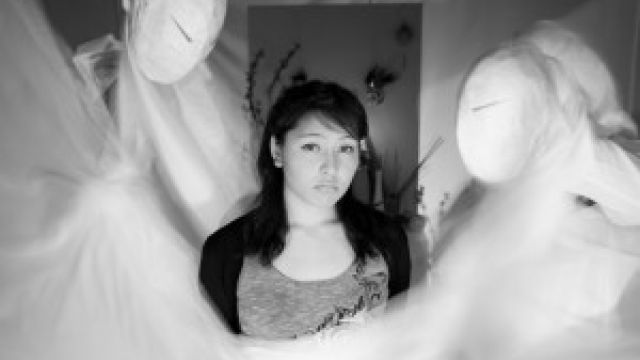 Silence demonstrates the power of faith, family and memory through the story of three Vietnamese/Australian women and was written by Vietnamese author and psychologist Hoa Pham (http://www.hoapham.net).
Gabrielle Chan, Diana Nguyen, and Ai Diem Le played the grandmother (Ba), mother (Ma), and daughter (Dao) respectively. Dao’s father (Ma’s wife and Ba’s son) was unfaithful to Ma and sexually abused Dao when she was a child. Ma named Dao after his mistress so he would never forget his unfaithfulness but, although he had disgraced the family, tradition stated that they should still respect his spirit after his recent death. The honest connection between all three performers was very sincere which led to a realistic portrayal of their relationships. We shared in their faith as Buddhists and experienced their customs and rituals as they respected, and eventually exorcised, his ghost.
Penelope Bartlau’s puppets, controlled by Bronwen Kamasz and Conor Fox, represented the father/husband/son visually. They ranged in size from a towering figure requiring both puppeteers, to flowing individual specters and a tiny spider-like spook. The puppets were a powerful theatrical device that gave the story true depth and motivation.
Lisa Hoebartner’s flowing set was fitting and the portraits of Vietnam War victims were a poignant addition, yet her intention to represent the floor as a radar map from a bomber plane over Vietnam did not really succeed. Silence is being presented as part of La Mama’s ‘Theatre for Our Diverse Community’ program, funded by the VicHealth ‘Arts About Us’ scheme.
Ian Nisbet