Such is Life – An Evening of One Act Plays. 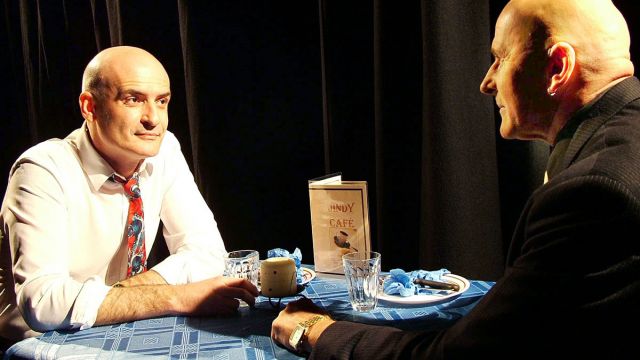 A Change of Heart by Colleen Soper, The Hitch Hiker by Lucille Fletcher and Asylum by Alec Baron. The Henry Lawson Theatre, Werrington (NSW). May 14 - June 4.

The Henry Lawson Theatre’s foyer has the feel of a bygone suburban cinema in miniature. The illusion continues as the lights go down in the auditorium of the intimate playhouse at Werrington in Sydney’s west. Impressively produced previews of future productions are screened before the live performance begins.

It’s a remarkable transformation of the tin-roofed shed I last visited about 20 years ago.

The latest attraction is a trio of short plays including a locally written play, a staging of a radio play and a moving post-holocaust drama.

Local writer Colleen Soper took the opportunity to direct her own play, A Change of Heart, which actually feels more like a short film.
A gay relationship develops between two married, middle-aged businessmen who meet on the railway station each morning – glances move on to discussions of families, hence to a gay relationship and planting petunias.
The strength of this production was focused, truthful performances by Aurel Vasilescu and Arpad Horvath (pictured).
Why does A Change of Heart read like a film? The blackouts between brief moments at the play’s start stretched way too long. Unnecessary movement of simple props extended scene shifts between café and railway station settings. Film would edit down these changes; better lighting design, too, could have achieved them more quickly.

The Hitch Hiker was originally written as a radio play, and director Joshua Crew basically recreated a radio studio performance. The set, a control booth, piano, three microphones and a number of chairs against the black backdrop, and costumes, with the actors smartly dressed in the appropriate evening dress – looked just right. The delightful rendering of an original period sponsor jingle got things off to a flying start.
There was splendid acting throughout, with Jeff Broktoff’s strong central performance well supported.
My reservation is that there were lapses in the convention of a live radio performance. The actors carried scripts, but they rarely seemed to be reading them, one actor spoke from off-stage, while a slap, too, should have been a sound effect.
Still, this was clearly not a problem for those less fussed on detail.

The highlight of the evening, and the darkest offering, was saved for last.
A powerful post-Holocaust drama about the guilt continuing to haunt an ordinary German many years after the war was played out in the office of an asylum psychiatrist.
Anthony Stirling-Edgar’s production of Asylum was impressively timed, and delicately orchestrated to its soundtrack. This added a sense of heightened drama, akin to classic tragedy, following an impressive stylized opening.
Limited props and furniture, well placed, dressed the stage stylishly and simply. David Attril and Janet Boreham found a tremendous chemistry in strong, truthful portrayals of the pivotal roles of inmate and doctor.
A prelude of Holocaust images, familiar, yet still visually shocking, laid the foundation for a thought-provoking end to the evening.

The Henry Lawson Theatre has a warm, welcoming feel, which left me looking forward to my next visit.