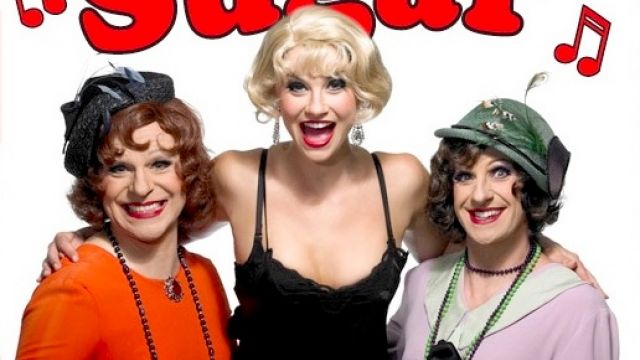 Orchestra Victoria was set upstage on risers, its predominance highlighting the importance of Styne’s music. All diegetic music was mimed, some better than others. The Society Syncopator girls did a great job but Mitchell Butel (Jerry/Daphne) could do with a little practice on his bass fiddle. Speaking of Butel, it was his duets with other characters that stole the evening (“We Could Be Close” with Christie Whelan (Sugar Kane) and “Beautiful Through and Through” with Dennis Olsen AM (Sir Osgood Fielding III)).

All three leads (Butel, Whelan, and Matt Hetherington as Joe/Josephine) lived well up to expectations with their singing and rapid-fire comic timing. Each excelled in the slapstick and physical comedy required for their parts and shared an on-stage chemistry that floated far out into the audience.

Apart from some historically accurate wheel chairs and an ear horn, set design and construction was unfortunate. The largest set piece – a bunk-style train carriage – was constructed with a scrim backing, clearly supported by uneven strips of gaffer tape. Said tape was not run horizontally or neatly across the top beam but vertically in different lengths and on a variety of angles that, once noticed, became quite the elephant in the room. Other specifically prop disappointments included blank A3 ‘newspapers,’ a flat hanging swordfish (which the script unfortunately called attention to), and extremely simplistic wooden Tommy guns. I understand the inconvenience of employing an armourer in order to use stage weapons, but the extra effort required to mock up a period newspaper or source a more-realistic swordfish would have added a touch of polish that the production was lacking.

Although some early tapping was out of time, I enjoyed the creative decision to have Spats Palazzo (Peter Lowrey) and his men tap their deaths after being ‘shot’ by Ronny Ferrella’s snare drum. Special mentions to Olsen for his creepy yet lovable Osgood, Melissa Langton as Sweet Sue, and ensemble members Scott Hili and Claire George who stood out in every chorus number.

Check out or Q & A with Christie Whelan - www.stagewhispers.com.au/news/christie-whelan-q-a