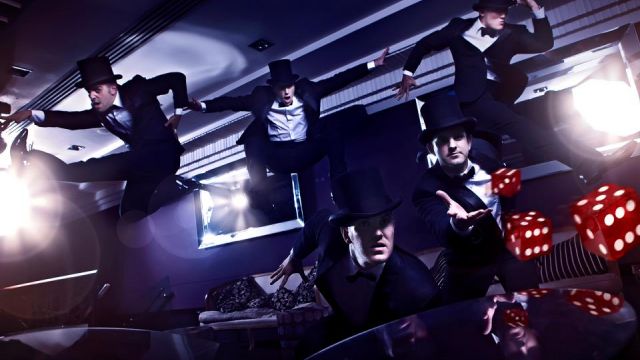 If there isn’t a show in which to sing and dance, create your own! And that’s what The Tap Pack is all about!

The song and dance men, Rohan Browne, Kuki Tipoki, Jessie Rasmussen, Dion Bilios and Thomas J Egan, are all very experienced dancers, with a wealth of stage and film credits in Australia and overseas. Rasmussen, Egan and Jordan Pollard have created and choreographed the piece, which is, as one would expect, a showcase of tapping talent.

In an hour of fast moving routines, the guys tap up a storm, broken by some quieter songs, a little dialogue, a few very sick jokes, and some excitingly energetic solos. It’s what you expect of a tap show – lots of dancing, stunning solos and a few songs – but not very much story.

It is based (very loosely) on the Frank Sinatra, Dean Martin, Sammy Davis Junior, Peter Lawford and Joey Bishop Rat Pack that wowed crowds in Las Vegas during the 1960s. Complete with American accents and some classic songs of the time, the plot involves a dance troupe which is having problems getting work, getting paid and getting to rehearse.

The leader wants to keep dancing to 1960s classics; the youngest wants to try something new; another drinks too much (Dean Martin?); two are ready to leave. All are disgruntled. Then some money is found, a Las Vegas producer comes to see their work – and we assume they get the gig. That’s the plot!

There is, however, nothing one could fault in the dancing, the singing – or the music.  The band, The Rat Pack Bandits, led by Chris King and featuring some creative drumming by Dom Cabrera, is great – a perfect backdrop to the tapping talent. The set is simple – the stage and some steps, easily transported or ‘found’ for a touring show.

For tap lovers, it is a classic piece performed by five very vital, talented and experienced performers. Billing it as a ‘tap comedy’, though, is probably a little enthusiastic. It is a about dancers strutting their stuff with a bit of a plot on which to hang their performances.

But, hey, they are great tappers and that’s what its all about.