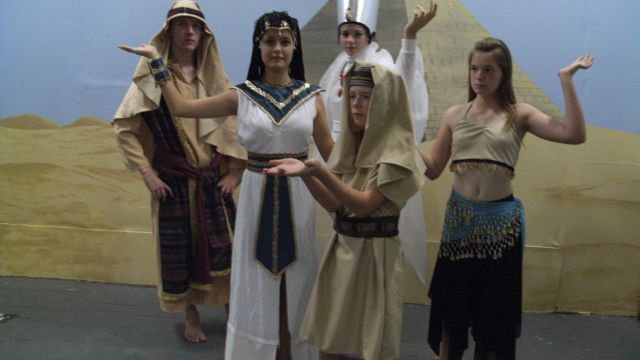 Darlington Theatre Players youth group performed this World Premiere, featuring a cast of thirty-nine young people from thirteen years of age.
Written and directed by DTP member LaVerne Kirton, this work of ‘faction’ tells of Egypt’s boy king – exploring Ancient Egyptian culture against contemporary music, set in the present day Egypt and the eternal Hall of Judgment.
Good performances featured throughout. Josh Money and Bianca Summers were solid in the central roles of Tutankhamun and his young widow Ankhsenamun. They were surrounded by a bevy of suspected usurpers and plotters, Bahiti (David Sorenson), Ay (Lleuwyn Taylor), Horemheb (Alex Walker) and the gorgeously deceptive handmaiden Amisi (a very strong Deborah Gordon).
We met a past pharaoh, Hatshepsut, in an elegant performance by Imogen Castledine and Egyptian gods – the beautifully attired and centred Stacey Gay, Robert Anderson, Jesse Wood and Isaac Money.
The ancient world is accessed via a pair of modern tourists, energetically and enthusiastically portrayed by Tim Presant and Jacob Neal.
No less than three chorrii, Dancing, Singing and General, supported the action, all exquisitely costumed and bewigged.
Singing throughout, under Bill Higgins’ musical direction, was nicely handled, while Susan Jane Donaldson’s choreography was well executed. My disappointment with the production was that while each performance number was admirable as a stand-alone item, there was a sameness and predictability to each piece. Singers were consistently pushed to the side to allow a dance team (with tenuous connection to the plot) to take centre stage, making each song indistinguishable.
This show is an excellent choice for a young company, with most of the leading roles wonderfully suited to youthful performers. Its fascinating subject matter inspired a study of Egyptology by my young companion.
Kimberley Shaw