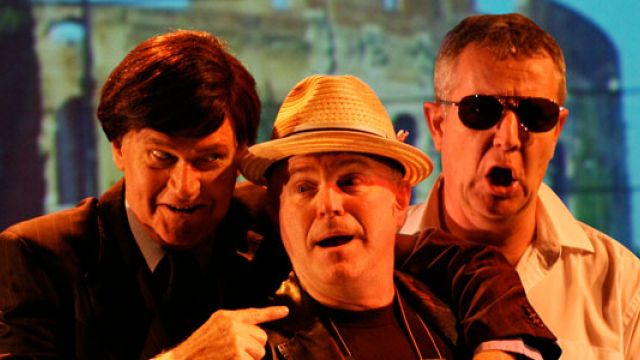 Sydney Theatre Company’s Wharf Revue, which has been making Sydneysiders laugh for the past ten years, in recent times has also toured the Eastern states. Debt Defying Acts is midway through its tryout tour which started in Gosford 30th September and ends back at the Wharf 17th November.

With the circus as its metaphor and performed under a canvas big-top set, Jonathan Biggins, Drew Forsythe, Philip Scott and Amanda Biship are all experts in the art of lampoon. Clever wordsmithery and sharp political satire are the order of the day and there’s no doubt, Debt Defying Acts delivers. Highlights include Julia Gillard (Bishop) and Kevin Rudd (Scott) as Christine and the Phantom in a riotous take on Phantom of the Opera and Love Never Dies (“Rudd never dies”), Rupert Murdoch (Forsythe) and the News of the World debacle done as King Lear, and Japanese whalers, Greenpeace, and a little bit of the Iron Chef all mixed up as The Mikado. Others that hit the bullseye were Bob Katter and his gay brother, Hawke and Keating in wheelchairs running a retirement home like a political party, and Alan Jones as the Sorcerer and other radio shock-jocks as his Apprentices.

I’ve never seen a Wharf Revue before so I can’t say how this one stacks up against its predecessors, but I can say that I found it funny, sometimes funny-funny, and frequently uproariously funny.