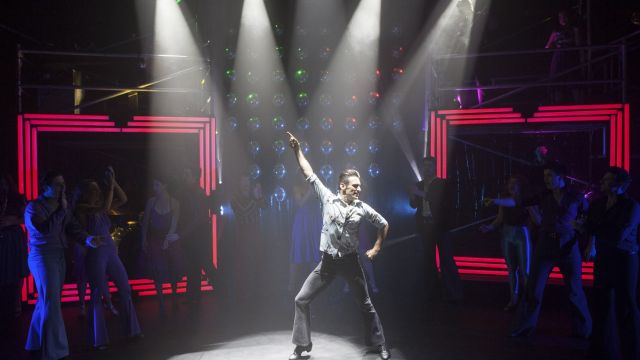 Jason Bovaird from Moving Light Productions was asked to provide the lighting design for StageArt’s production of Saturday Night Fever the Musical in February. He explains how he put together the biggest conventional and moving lighting rig ever set up in Melbourne’s Chapel of Chapel in a four day bump in.

In the 1977 movie John Travolta is seen dancing on a traditional disco floor flashing light grid. For this production the director wanted to simulate a dance floor with light.

The set had scaffolding as the backdrop. Two scaffold boxes, either side of the set, were built to incorporate the band. The edging of these boxes had a simulated LED Dance Floor “look”. Eight LED tubes in three layers surrounded each box.

This lighting rig was the biggest conventional and moving light rig that Chapel Off Chapel had ever seen (specifications are below). At the back of the stage 56 Mirror balls were hung on separate channels. The strings rotated throughout the show.

When you have a stationary set, the lighting needs to take the audience on a journey through thedifferent locales and looks in the show. We used LED pars to up light all the scaffolding.

For the chase scenes, we used a metronome to work out the beats of the music. This allowed us to get the exact times of the chases to match the choreography. The lighting was timed on a stop watch and visual moves were written down by the stage manager then cued with the script. 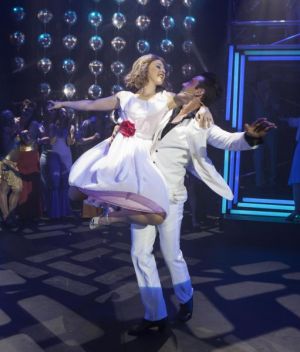 This required a lot of planning and paper work, soI brought on board an Associate Lighting Designer, Maddy Seach, a 2012 VCA graduate, to assist.This allowed me to be able to concentrate on the design element and the final look of the show.

The Moving Light production team prepared visual magic sheets of the rig and LED Tubes on an ETC GIO console. It gave us a visual representation of the 387 pixels of happy tubes in colour, movement and particularly the chase effects that became a strong element of the production.

The ability to be able to quick reference lamps, effects and palettes using the touch screen of the GIO enables us to program more efficiently

There was a super tight production schedule. The show bumped-in on the Monday and by Thursday night the audience watched the production. We had to be super prepared both on paper and in the efficiency of programming the show.

Using thorough pre-production paperwork and magic sheet technology from the GIO lighting console, we were able to incorporate multiple LED happy tubes with a large scale moving light rig to achieve the look the show required most efficiently.

The lighting added another visual dimension to the slick choreography throughout the big and bold dance numbers, in a story about one man who just wanted to dance.

Specifications: The lighting rig was comprised of 37 generic fixtures, 20 LED Multipars, 24 moving light fixtures and 48 LED happy tubes. This was run over 3 universes of DMX with the LED tubes taking up 387 channels alone. Each of the LED Tubes ran in 8 pixel mode which allowed us to split the tubes into 192 different coloured LED sections a side. 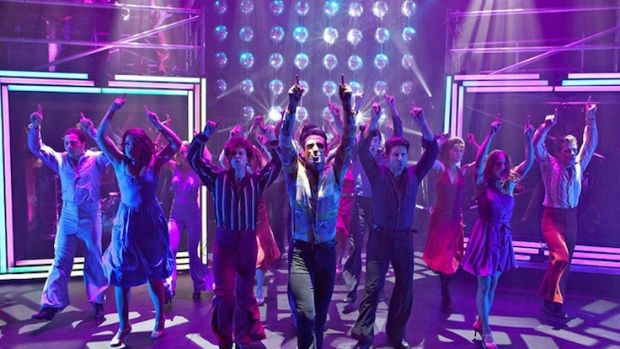