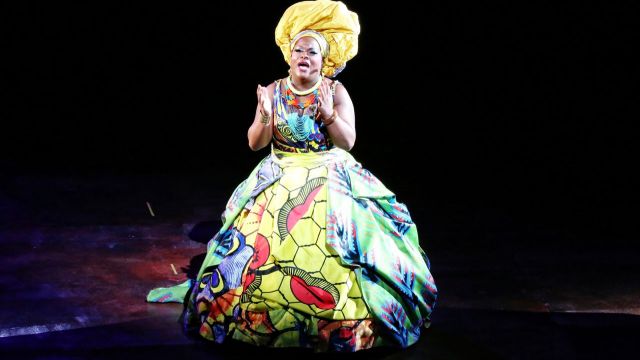 “For this production of Aida we threw out the rules. It was a broad-brush approach and didn’t look anything like you would expect. We wanted the audience to obviously recognise that there were people in power and people who were slaves. But we also wanted to make the slaves look like part of the world the victors also might have lived in. Every costume is handmade and fitted for each performer.”

Materials: There are five different printed fabrics in the skirt and all of those fabrics were especially printed for this one design. Underneath are layers and layers and layers of ballet netted tulle to give the really wide base.
“All of the slaves’ costumes were based on existing contemporary African fashion. I looked towards current runway collections and also archival images from the turn of the century when printed fabrics first became available. But then I made the skirts and turbans even bigger and even more colourful.” 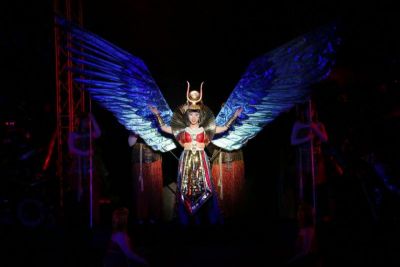 Materials: “It’s made up of really cheap materials that we found at a fabric remnants shop in Cabramatta. It’s the kind of glitter material that mums use to make up dance class costumes. But if you get 10 or 12 meters of it and put it all in one skirt, suddenly it doesn’t look like that anymore, under the lights it looks a million dollars. If you shake the skirt, all this glitter falls everywhere.

“This costume and character never usually appears on stage in any other production as it’s supposed to be sung offstage. But we decided it was such a good song so it had to feature. There’s no kind of design history as to what that performer would ever wear so I just though let’s go all out to make this amazing costume that appears on stage for five minutes. The wings are being held up by four ladies from behind and we had to design those costumes so they looked like they fit in as part of her followers.” 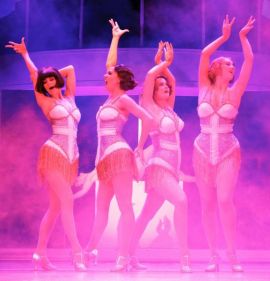 When it’s worn: In the song ‘Blow Gabriel Blow’

Materials: “I went with the look of glued on rhinestones rather than flat sequins.I looked towards old 1930’s movies for inspiration, the time of the showgirl. This scene is often costumed devil-like as if they’ve descended to hell, but we had a different approach as we wanted to keep them as Angels. Instead, the transition would be from choir girls to high kicking showgirls. We maintained the symbol of the cross to demonstrate where they’ve come from.” 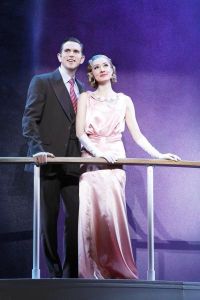 When it’s worn: In her first song

“I tried to keep a colour theme going for each character and I wanted Hope to have some sort of transition. I used baby pink to give the feeling of innocence and being debutante, and as we enter the second act where she’s a little more worldly she wears pink with a red velvet sash.”