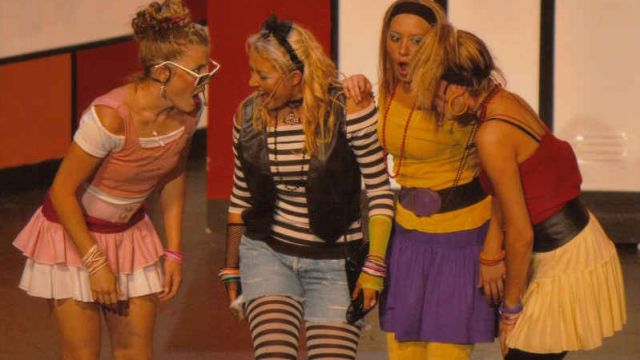 Neil Gooding explains how his musical Back to the 80’s has gone global … from Mexico to Oman to Germany!

The idea for Back to the 80’s came to me when I was walking along the streets of Melbourne with a friend. I had a feeling that following the success of the movie and soundtrack of The Wedding Singer that the 80’s had finally moved from being a hideous train-wreck in most people’s memories, to being an era viewed with great nostalgia by young and old.
This same process had happened with the 50’s, the 60’s and the 70’s … so I figured that it was only a matter of time before it logically happened with the 80’s as well. Luckily the 80’s was an era uniquely defined by outrageous fashion, iconic performers, and best of all … by brilliant pop music! It also just happened to be my era.
I barely slept the night that the idea started coming to me. By the time that the sun rose, I was surrounded by long lists of all of my 80’s memories: favourite songs, movies, TV shows, memorable characters, defining events, etc., etc. It turned out that I was a walking encyclopedia of the 80’s – simply by having been a child aged 4 to 11 during those years.
After writing on and off for about a year, Kirwan High School, Townsville, approached me to stage the first production. To my delight, the show actually worked very well. There were just under 20 productions of Back to the 80’s in Australia in that first year of it’s release. It was becoming apparent that the show was finding a market – and an audience. Once all of the music licensing had been sorted out (which is a torturous, tedious process … particularly overseas), the show was ready to go.
These days there are hundreds of productions each year globally. As well as all major English speaking countries including the US, Back to the 80’s has been staged in places that have had me reaching for an atlas.
They include Mexico, Argentina, Malaysia, The Isle Of Man, Sweden, The Netherlands and Germany. Then there is the most recent … and possibly the most obscure licensing request that we have received to date – Oman! The show has been translated into Spanish, traditional Welsh, and is about to be translated into French.

Some of the more memorable productions are:
The World Premiere at Kirwan High School in Townsville (May 2002). Watching your show on stage for the first time is a truly terrifying prospect. But, when it is done in a beautiful 1000 seat theatre, by a cast of over 100, this becomes a bit easier
The Laycock Street Theatre, Gosford production (February 2004) was basically the first real workshop of the script. The end results were brilliant – and a lot of the additions are still part of the script today.
A Welsh production by Ysgol Y Strade, a high school in Llanelli, Wales. Firstly they translated the script into traditional Welsh. Then, they staged the musical in their hall. After that, they contacted Cameron Mackintosh’s office to see if they could get a West End Theatre for one night. They did – and they tell me that with that performance, they became the first school to perform a full musical in the West End.

I look forward enormously to discovering what unexpected roads Back to the 80’s goes down next (and hopefully to traveling a lot more to see some of them!)
For more information, please visit www.backtothe80smusical.com or contact David Spicer Productions