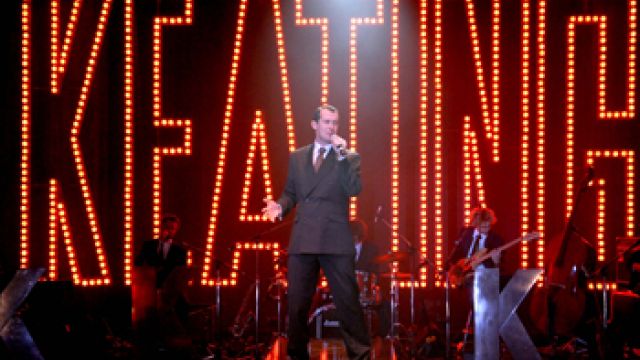 Keating The Musical.
David Spicer Productions is excited to announce the release to community theatre of the rights to another musical blockbuster, KEATING! by Casey Bennetto. It sold out across Australia and won a Helpmann for Best Musical.
"Casey Bennetto's witty, selectively biographical opera decisively throws the switch to vaudeville. And cabaret, country, hip hop, reggae and mambo (the Mabo Mambo, in fact) among others." Sydney Morning Herald.
"This extremely clever and superbly funny production requires little knowledge of the time, but either a respect, or an ability to laugh at, the Placido Domingo of Australian politics." The Age.
"The Gilles Report meets rock concert with a little Rocky Horror thrown in for good measure, it is hyperactive, hilarious fun." The Independent.
Suitable for regular or dinner theatre, drama groups and musical societies.
Small Band Orchestrations or backing available.
Cast: Paul Keating, Bob Hawke, Alexander Downer, John Hewson, Gareth Evans, John Howard, Cheryl Kernot.

Greenwillow
Music and Lyrics Frank Loesser, Book by Frank Loesser and Lesser Samuels. Based on the Best-Selling Novel by B.J. Chute
From the composer of Guys and Dolls comes the tale of a magical town whose inhabitants see no reason to leave the comforts of home … that is, all the inhabitants but one. With a lush, romantic score, fine ensemble singing, and a cast of quirky, fable-book characters.

13 - the New Musical
Music and Lyrics by Jason Robert Brown, Book by Dan Elish and Robert Horn.
A grown-up story about growing up!
With an unforgettable rock score from Tony Award-winning composer Jason Robert Brown, "13" is a hilarious, high-energy musical for all ages about discovering that cool is where you find it, and sometimes where you least expect it.

Dracula
Music by Frank Wildhorn. Book and Lyrics by Don Black and Christopher Hampton.
Drink deep … and live forever! A terrifying and passionate new musical based on one of the most frightening novels ever written.
"Dracula: The Musical" is a thrilling drama of suspense and a Gothic romance of dreamlike temptation. Set in Europe at the end of the Victorian Age, the production follows Dracula's lust for new blood and a small band of mortal men and women who must face his overwhelming seduction and mesmeric supernatural powers.

The Glorious Ones.
Book and lyrics by Lynn Ahrens, Music by Stephen Flaherty.
Both slapstick and serious, the musical follows a traveling band of actors in 16th century Italy, as they search for immorality and love, on a journey that leads right to present day.
From the team who wrote Seusical, The Glorious Ones was hailed by the New York Times as "a valentine to the actor's life--joyfully naughty."

A Night in Provence by Robin Hawdon
Ah Provence! The French Riviera. Where the well-to-do rent luxury villas for exorbitant sums in order to get their annual fix of sun, sea, and haute cuisine. However, imagine the crisis if one such sumptuous place was double booked. Worse – imagine it triple booked! By a French couple, an English couple, and heaven forbid, an Irish/American couple. Marriages have foundered on less. Add the ingredients of copious champagne, heightened sexual impulses, and ingrained cultural differences, and the European Union could well implode!
Cast: 3m, 3f.

Blood and Ice - The Story of the Creation of Frankenstein by Liz Lochhead
Summer 1816. A house party on the shores of Lake Geneva. Eighteen-year-old Mary and her husband Percy Bysshe Shelley, along with Mary’s half-sister Claire and the infamous Lord Byron, take part in a challenge to see who can write the most horrifying story. Mary’s contribution is to become one of the most celebrated Gothic novels of all time.
Cast: 2m, 3f.

Shrinking Violets and Towering Tiger Lilies – A Bouquet of Female Delights by Tina Howe
Seven Brief Plays and Comedies about women in distress.
To go through life as a woman is to be in distress most of the time, so these short plays alight on situations that are inherently distressing – doctor visits, photo shoots, looking for the right dress and navigating around swimming pools.

Reefer Madness
Book by Kevin Murphy & Dan Studney, Music by Dan Studney, Lyrics by Kevin Murphy
Inspired by the original 1936 film of the same name, this raucous award winning musical comedy takes a tongue-in-cheek look at the hysteria caused when clean-cut kids fall prey to marijuana, leading them on an hysterical downward spiral filled with evil jazz music, sex and violence. You won't be able to resist the spoofy fun of Reefer Madness. This dynamic show will go straight to your head! Reefer Madness is a highly stylized and satirical political commentary. It contains adult humour, religious parody and drug use, as well as suggested violence and sexual explicitness. It therefore may be inappropriate for younger performers and audiences.
Cast: 4M, 3W and Chorus.
www.reefermadness.org

The Brain From Planet X
Music and Lyrics by Bruce Kimmel, Book by David Wechter and Bruce Kimmel.
The Brain From Planet X takes place in the San Fernando Valley, California, U.S.A. during the summer, circa 1958.
A hilarious musical send-up of bad 50’s sci-fi movies, THE BRAIN FROM PLANET X tells the story of an alien invasion circa 1958. A Brain and its two alien cohorts arrive on Earth with a plan to take over the San Fernando Valley - starting with a happy nuclear family. It’s the first step on the road to their quest of taking over the entire planet and destroying the family unit. This rousing, toe-tapping musical features a dancing, singing brain ... what more could you want from a musical?
Cast: 3 F, 6m plus singing-dancing ensemble.