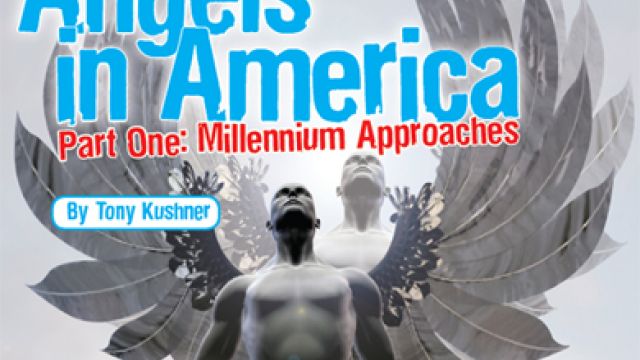 One of my prevailing theatrical memories from 1992 is sitting in the Cottesloe Theatre, London and being gobsmacked by Declan Donnellan’s production of Angels in America Part 1. At its climax the Angel burst through what seemed like a very solid wall, spoke her lines, then vanished miraculously, leaving the audience gasping. I remember thinking that this combination of magic realism, political potency and emotional gravitas added up to an extraordinary night in the theatre. Michael Gow’s stunningly raw production the following year at the Sydney Theatre Company only highlighted for me Kushner’s relevance and joy of language.

Concept
I was very aware that the play grew out of a period of AIDS hysteria, a time that was complicated by extreme fears and diseased factions. AIDS is currently a manageable illness but Kushner’s themes and language maintained their inherent muscular intelligence. As I delved further into his world I felt that Angels could be upheld as a modern classic that spoke to a contemporary audience.

Set Design
In essence, the designer and I wanted to offer a metaphorical landscape for the production. After sifting through many images we settled on Mapplethorpe’s stunning nudes as a starting point. The magnificent silver tree was born of images of Central Park in autumn, doubling as a life-affirming symbol. Its metallic silver finish reflected New York City’s skyline with particular homage to the Chrysler building. What eventually graced the stage was a three-dimensional metallic tree trunk composed of Mapplethorpe’s sensual body parts, with a single large branch extending far prompt side, from which the projection screen hung. It looked elegant and simple; a silver, sculptural tree with an extended branch and scrim that seemed to float in space.

Projected Imagery
The production used projected imagery to offer the audience a specific location, while others imbued the scene with an emotional resonance. A digital projector made the process technically smooth and a special effects mixing desk offered flexibility. The conceit gave a very contemporary edge to the production enabling us to compile a visual montage that took the audience through the AIDS genesis from present day to 1985, where the play begins.
Kushner prefaces his play by stating, “The play benefits from a pared down presentation, with minimal scenery and scene shifts done rapidly (no blackouts!) employing the cast as well as stagehands – which makes for an actor driven event, as this must be.” I was determined to be true to his wishes.

Costume Design
As the set concept was abstract it was important for us to offer the audience a sense of period through the costume designs. It was a complex journey as most of the actors doubled and the overall time line needed to be defined by how the characters progressed through their clothing.

Sound Design
I worked closely with the sound designer who composed a magnificent opening piece of music that underscored the collage of AIDS images that opened the show. This theme, in various guises, linked certain scenes and gave the production a musical identity. Much of the soundscape evolved out of what was happening in the last moment of the previous scene linking into the context of the next. Kushner often referenced famous cinematic moments with orchestrated scores, so we listened to these, re-worked them and wove them into the production.

Assistant Director
Although this production had a limited budget, I knew that its epic nature would demand a highly organized process; tight scheduling at every level would allow us the structure to remain creatively focused. My assistant and I spent many hours on the drafting of rehearsal and production schedules in order to maximize time.

Lighting Design
One major challenge was to maintain stage light without flooding the projected imagery. It became evident that the stage action needed to play as far downstage as possible to achieve the desired effect. Another major feature, the silver tree trunk, required various lighting states to achieve versatility; much of this was solved with the strategic placement of footlights. As each scene bled into the next we devised a lighting conceit, which successfully linked the various scenarios, allowing time for furniture to be removed and placed. These lighting transitions were timed exactly to the action and soundscape, resulting in a coherent visual composition.

Casting Process
Angels in America is a complex and layered text. All but one character doubles and each role requires emotional dexterity. Casting the right actors is integral to the production’s success and we allowed a month of open auditions to achieve this. Once we narrowed down the selection, it was important to pair up various actors to see how they would interact before offering roles.

Dialect & Vocal Coach
Dialect coaching and vocal work early on in the rehearsal process allowed time for the performers to undertake the challenge dimensionally. Our coach’s attention to detail resulted in accents that resonated naturally, while certain intonations and quirks were added to enhance characterizations.

Choreography / Physicality
Our experts collaborated on the physical aspect of the ADIS virus symptoms, concentrating on how they would manifest through the body. It was important to look at how the disease progressed over the play’s time frame, especially where Prior and Roy Cohn were concerned. There were several other more specific choreographic moments such as the fantasy Waltz and Drag dream sequence, which required their expert attention. It was a joy to watch the impact that this process had on performance.

Rehearsal Process
I cleared five weeks of my time allowing maximum rehearsal room presence.
Once in the room much time was spent in understanding Kushner’s brilliant text, researching and referencing his sources, analyzing his intentions and exploring characterizations. His language is rich and rewarding, so ultimately playing for its truth was the main objective. Many actors doubled but the writing is so distinct that it was a joy to explore; the relationships were three-dimensional and the stakes high. As I have said, the cast were all highly skilled professionals who connected with the work; it makes for an incredibly dynamic and fulfilling time on the floor.

Budget
As our budget was limited, each department thought outside the square to solve creative issues. For instance, to finish the trunk in a metallic sheen, we devised a way of coating the installation in glad wrap and silver paint. Real tree branches were found and art-worked, the projection scrim was an odd off-cut from a larger roll, thus less expensive. Costumes were borrowed, hired and made, furniture pieces from the rehearsal room were utilized and everyone pitched in to help bump the production into the theatre.

Summation
A great work such as Tony Kushner’s Angels in America demands the best from all involved in its realization. The team worked with immense commitment and attention to detail. As a result the production offered much to be admired at all levels. As Harper states:
“Nothing’s lost forever. In this world, there is a kind of painful progress.
“Longing for what we’ve left behind, and dreaming ahead. At least I think that’s so.”
Tony Kushner’s Angels in America: Perestroika.