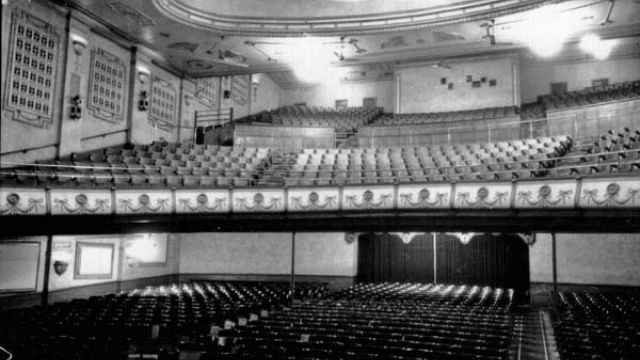 David Spicer visited the NSW regional city of Tamworth to celebrate the rebirth of its Capitol Theatre.

“It was a horror show and people have not got over it.”
This is how Meg Larkin, the manager of Tamworth’s new Capitol Theatre, describes the night the town’s historic picture theatre and sometime live entertainment venue was smashed to a pulp.
Local legend has it that the owner, fearing the mounting costs of having to restore the building, took matters into his own hands.
Tamworth’s Capitol Theatre was a sister venue to other beautiful atmospheric picture palaces built early in the 20th century around Australia and New Zealand. It had a capacity of 1600 seats – enormous for a small country centre.

It was 1984. Tamworth Musical Society Director Steve Carter sneaked in to take photos of the carnage.
“I arrived at work one morning to see the destruction that had been carried out since the previous afternoon,” he said. “It was sad to see that wonderful ‘picture palace,’ albeit in a poor state of repair, reduced to a pile of rubble.”
“The true story behind why the theatre was suddenly destroyed will probably never be known. The rumours will remain a part of Tamworth folklore for many years,” he said. “I hope the ‘New Capitol’ is seen as a tribute to the previous venue, so that an important part of our history is not lost.”

Tamworth Regional Council finished what started on that shameful night. It ordered that the theatre be bulldozed on the same morning it was declared a heritage building.
Several decades on the council is filling the hole left in the town’s public facilities.
Tamworth is Australia’s country music capital, and has good large concert venues and also recently opened a massive Livestock Events Centre. But local or touring theatre companies were consigned to a rather primitive Town Hall.
Having spent their reserves on horses and cattle in the Livestock centre, and elsewhere on country music fans, the Council had no cash to build a theatre. Its solution was to integrate a new theatre into a multiplex cinema inside a new shopping centre.
It’s made economic sense. Instead of spending tens of millions of dollars on a new stand-alone venue, the council has put in just $1.6 million to the fit out and pays an annual lease on the 402 seat theatre. For six weeks of every year – usually during the school holidays – the theatre will be used for cinema. It doubles as the largest of six cinemas inside the town’s new mall.

Theatre Manager Meg Larkin says she’s hoping that locals coming to the cinema will be diverted to live entertainment.
“More people are comfortable coming into a cinema rather than a cultural centre. We will now share advertising with the cinema box office,” she said.
There are other perks.
“There is plenty of parking in the shopping centre. People can easily get tickets while out buying their groceries and there is the smell of popcorn in the foyer,” she said.
She emphasizes that the theatre was built as a performing arts centre first and cinema second.
The Capitol contains 402 seats and has two large dressing rooms with en suites, a disabled dressing room, also with en suite, a green room and a large chorus room under the stage.
Technical fit-out includes a fly tower, with equipment including motorised winches provided by Jands, and an orchestra pit, accommodating 25 musicians, with pit lift by Serapid.
The first production was The Boy From Oz, performed by the Tamworth Musical Society in November.
“The Council is confident that this new facility will add immensely to the range of theatrical experiences that can be presented in Tamworth and looks forward to working with the local community and the touring industry in presenting a dynamic range of programs,” said Ms Larkin.

When I attended opening night you could tell it was a new venue. Firstly there was that ‘fresh’ smell, mixed with the popcorn coming from the foyer. Inside the dressing rooms there was a leak – yet to be plugged. And the lighting operators had the challenge of working on a complicated show and trying to get used out to a vastly more sophisticated system.
During the final weekend of performances Tamworth was flooded and the town was split in two.
The show did go on.
The combination of a new venue and the popularity of The Boy From Oz saw the Tamworth Musical Society break its box office record, set last year with Les Mis, and sell almost 4000 tickets.
They love their new Capitol and won’t let it disappear again.

Sydney Venue Abruptly Closes
An intimate new Sydney theatre venue has abruptly closed its doors without explanation. The website of Limelight on... more

Design for New Brisbane Theatre Unveiled
Just short of a year since the announcement was made about a new $150 million theatre to be constructed at Queensland... more

Theatre Jewels of Western Australia
Stage Whispers is excited to introduce a new series of features from our correspondents, nominating their favourite... more

Content, Construction and Community
What the next 12 months holds for Western Sydney’s New Theatre for the arts. With just 12 months to go until... more