THE EMPIRE THEATRE OF THE STARS - A Postcard from Toowoomba Queensland. 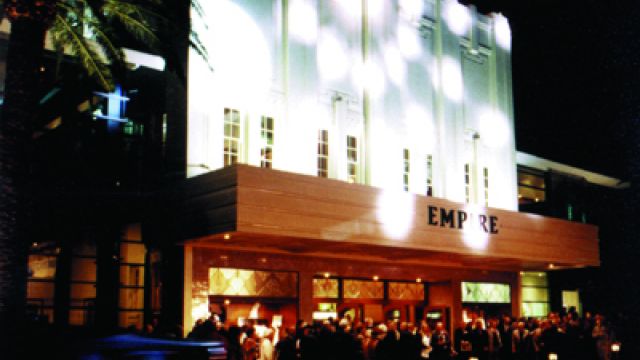 David Spicer reports that ninety minutes from Brisbane is a theatrical jewel.

It must be one of the most beautiful and best-equipped theatres in regional Australia. Great charm and beauty from being built in the art deco style, plus amazing facilities back stage. The Empire Theatre in Toowoomba is now greatly admired by its local community and visiting artists alike. However it very nearly met the same fate as many other performing arts venues – at the end of a wrecker’s ball.
I spoke with Margaret Turnbull the Events Manager of the Empire Theatres while we sat in the gallery. We gazed down at the dazzling proscenium, which adorns the stage like an intricately woven tablecloth.
“Where you are sitting used to be 30 centimetres under pigeon poo,” she remarked. “In the 1990’s the Empire was being used for adult education classes. There were classes downstairs – students were allowed to practice painting on the walls of the theatre.”
At the time the town was deeply divided.
“Half wanted it to be refurbished. Half wanted it bulldozed to be rebuilt as a multi-purpose venue,” she said.
So how did the Glorious Empire come to be on death row?
Let’s rewind 100 years.
In 1909 a local Doctor, buoyed by the huge popularity of silent movies, lobbied the Toowoomba community to build a picture palace. In 1911 The Empire Theatre opened with a seating capacity of 2200. It went from strength to strength until a fateful night in 1933.
A sixteen-year-old boy first noticed the smoke. It was the largest fire in Toowoomba’s history.
A local historian wrote, “ The building was reduced to a mass of twisted metal and smoldering rubble in a little over a hour.” Only two walls survived, which are included in the current building.
The good folk of the town bounced back. Within 10 months The Empire Theatre had been reborn – in the magnificent art deco style of the time.
For almost forty years the Empire Theatre thrived with movies, concerts and grand touring JC Williamson musicals. With a capacity of 2400 it was the largest theatre in regional Australia.
It closed in the early 70’s and become a furniture store and later a TAFE – which is where the pigeons settled in.
In 1995 the town was bitterly divided over what to do with the building. Saving the Empire ended up being political suicide for the powers that ruled the local Council.
“The Mayor Ross Miller put his casting vote in favour of refurbishment (over demolition) and the next election he voted out. Such was the ill feeling,” said Margaret Turnbull.
“Twelve years down the track those opponents come here and admit they were wrong. But it took some years to win them over,” she said.
What the town now has is the sparkling mix of heritage and the best facilities.
A 1500 seat theatre with style, and a huge backstage facility. There are enough dressing rooms to accommodate scores of performers and a top-notch fly tower. This mix of old and new is a result of the refurbishment demolishing everything behind the proscenium and starting from scratch.
The innovation has continued since then. Many local councils make the mistake of running performing arts venues with bureaucrats with little passion or understanding of the arts. They treat them as facilities to rent, much like any commercial building.
What is unique about Toowoomba is that an independent company, Empire Theatres Limited, runs the venue. It’s owned by the Council but is at arms length, to employ enough people to program and market the venue.
It’s proved so successful that Empire Theatres has recently employed a full-time artistic Director - Lewis Jones. He leads a professional creative team that directs the theatre’s program of community musicals. Each member of the creative team mentors a local, so they have a ‘Deputy’ Director who learns the ropes under the guidance of a professional.
Lewis Jones is now planning to help stage some original pieces of theatre emanating from the local community. Having a pro-active Artistic Director is almost unheard of – even in large established theatres.
This year the Empire Theatre staged Singin’ in the Rain and later in the year will stage Cats. Singin’ in Rain, which charts the course of movie stars at the cross over from silent movies to talkies, was perfect for the venue, originally built for silent movies.
The title Empire is appropriate for the theatre in more respects than one. The Council also purchased a church next to the theatre, which can be used for smaller performances, and a recently purchased neighbouring office block is earmarked for theatrical training purposes down the track.
Toowoomba also has a thriving arts scene outside the venue. The Toowoomba Choral Society stages musicals and concerts. The Toowoomba Repertory Club puts on five plays a year at its own charming venue. And the University of Southern Queensland has a drama department, which puts on a well-respected Shakespeare festival each year and tours to local communities.
All from a town of 90,000 … more than one hundred twenty kilometres from Brisbane. With the Empire Theatre open for performances 80 nights a year, it’s well worth a look.