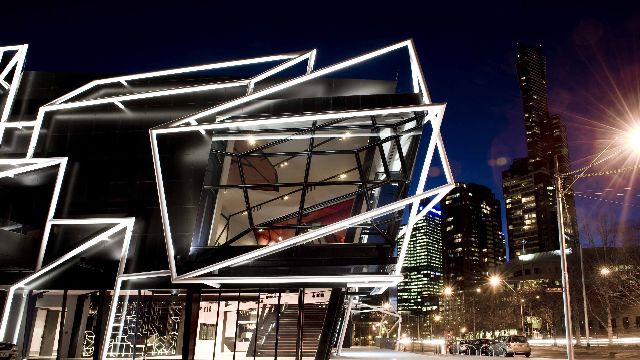 I met Ann Tonks on the eve of the opening of the theatre that has been an MTC priority since the demise of the 420 seat Russell Street Theatre, which “fell apart after about 30 years.”
“In this day and age, are actors prepared to put up with appalling backstage environments – like rats and mice, and no space? Are audiences prepared to stand out on the street to have their cup of coffee on a cold winter’s night in Melbourne? “ she said.
The brief for the new space, based on international experience, was for a 500 seat theatre, the ideal both artistically and fiscally for spoken word drama.
“The thing about Melbourne is that there are no 500 seat theatres. All the beautiful old theatres like the Princess, the Comedy and the Maj, which are all fantastic, are all big. They’re all even bigger than the Playhouse, and we have had difficulty filling the Playhouse with every show we do. It’s about 860 seats. If you’re doing a seven or eight week run, that’s a lot of seats to sell,” Ann continued.
While musicals like 25th Annual Putnam County Spelling Bee fill the larger Playhouse with both energy and patrons, a four-hander tends to get lost there, and can play to half empty houses, regardless of the quality of the play.

Theatres can be such architect’s follies, with poor sightlines, sound problems, etc. The MTC set about avoiding such pitfalls even before a site had been chosen. Among the key elements of the brief they developed was the stage.
“We wanted to have a stage floor that was going to make it much easier for us to put in traps and under-stage activities. Instead of having to cut the stage floor up, we’ve got a completely modular floor,” Anne said.
Other technical innovations at the Sumner include a lightweight, moveable proscenium.
“The whole design of the proscenium frame is an integrated, but moveable process, that is lighter and easier to do than other theatres around the country. We can put touring shows into a much better context, and give directors and designers much more fluidity,” she added.
The theatre has power flying and all the newest technical equipment in terms of lighting and sound.
Actors and stage managers were brought together in focus groups to contribute to the brief.
“It’s a modest thing in some ways, for example, but actors talked about having some daylight, so most of the dressing rooms have been placed, with windows – high – for security reasons – but they’ve got windows, and they’ve got light.”

The exterior also reflects the specific desires of the company.
“One of the interesting early discussions was around how you make a contemporary building, which the architects are going to want to make iconic, - how do you make that in such a way that it’s warm rather than cold, light rather than dark, and for night rather than for day,” Ann said.
“What we wanted is a building that’s transparent – where you can see people inside, so that you know that you could be one of those people inside. And when you look at one of the old theatres, when a show is in they’re lit up. Go up Spring Street to the Princess, and when a show is in the lights are flashing, the energy is there. We wanted a building that did that.”
“The architects responded by starting with a building that had lots of windows so you can see in, but also where the building stepped away from the externality, which glows at night. So those white pipes make a really strong night-time statement, and luckily they work in the day as well.”

Theatres generally have their quirks – I asked if there was also an MTC checklist of things to be avoided.
“The classic was (in the UK) when the project manager went away for a week or two thinking everything was in place, he came back to discover that the builders had built the outside wall leading into the dock area with just a normal sized door. They had a huge dock door leading onto the stage, but they’d forgotten that they needed an equally huge door on the outside of the building in order to get things in.
“Modern Australian theatre construction horror stories include a small rattle in part of one new theatre due to incorrect air-conditioning ducting embedded in the concrete of the building.”

Was there an easy alliance between the artistic and the practical?
“I’m sure at times we drove the architects Ashton Raggatt McDougall insane, because a theatre company, by definition, is about design. Talking to the architects and the theatre designers, who were concerned about the acoustics, we said we don’t want a bland interior. In those wonderful old theatres where there’s so much decoration, a lot of that was not only to do with the style of the time, but also to do with acoustics, and getting reflective surfaces.
“But most contemporary theatres are pretty boring in terms of how they look. The acousticians went, ‘well actually you’ve got to have wooden panels, and you’ve got to have holes in them. And we went ‘holes … holes …’ and the architects went, ‘so perhaps we might be able to have light behind the holes,’ and we said ‘that’s sounding good,’ then we said, if you’re putting light behind the holes, can we change the holes into words?’ They went ‘Yep, we can do that!’ So, we ended up with a brilliant solution, which gives us a decorative environment which works for the acoustics and is a strong architectural statement as well.”
Those words became quotes from plays; mostly plays that the MTC has staged.
“There are LED lights in all the panels behind them, so you can have any array of colours you might want, either individual panels with different colours, or the whole room. Perhaps you’re doing a tragedy, so you make the whole room feel indigo as you walk in, or you’re doing a comedy, so you make the room yellow when audiences come in.
“Toilets are always a huge discussion. ARM came up with one toilet proposal which we liked, which is that one set has this beautiful wallpaper that is based on new renderings of old scenic art drops from the Williamson years. So you’ve got a sparky, loud, bright contemporary set of toilets, and then you’ve got a set of toilets that are full of images that were used in theatrical productions in Australia a hundred years ago.”

And the perennial theatre toilet question?
“There will never be enough ladies toilets. I fought and fought and fought, but it won’t be enough. I can’t remember whether the final outcome was two and a half or three times what the building code says, but eventually the builders and architects said there are limits, and you’ve reached them. I’m sure I’m going to be bailed up at every show by women saying ‘you promised there’d be more.’ ”

There is an emphasis on Australian plays in the first season of the new theatre.
“We usually have three or four Australian plays in each season, but this was an act of choice, because Simon wanted to make a statement about ‘here is this new venue, designed by Australian architects, designed for an Australian company. Let’s celebrate the best Australian culture we can in that context. It won’t necessarily be the case into the future, but for year one he’s making a really strong statement.”

In addition to the mainstage Sumner theatre, the new complex will include a multi-purpose rehearsal / studio space, the Lawler.
“It’s going to be, I was going to say a black box, but it’s not. It’s a burgundy box.
“The Lawler is going to give us a chance to put more energy, money and time into developing the sort of text-based work which we’re really interested in. That may become a space which becomes a visiting home for a number of the small companies. With Malthouse just down the road, with a really clear vision and brief that is very different to ours, there’s this extraordinary amount of energy about performance just in that little street.”