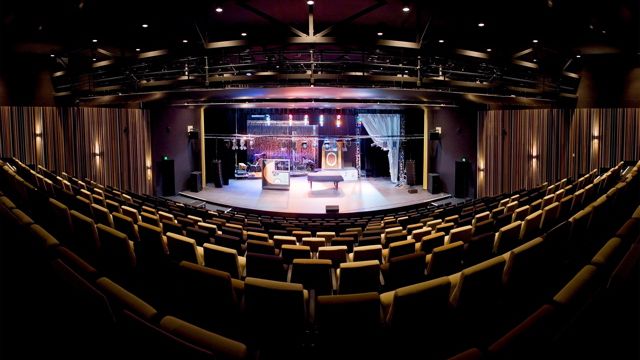 David Spicer takes a look at a sparkling new theatre on the outskirts of Canberra – which is delighting performers and audiences – but sparked a huge row in the local Council.

“When I first came here and it wasn’t finished. I stood on the stage and got goose bumps.”

This is the reaction that inspired Canberra Director Stephen Pike to become part of what is known as The Q … or the Queanbeyan Performing Arts Centre.

“The relationship between the audience and stage is quite intimate,” he said.

Now that Stephen Pike is the program manager of The Q he still gets goose bumps. It’s clear that designers of the nine million dollar, 340-seat venue got it right.

The wide proscenium and compact seating makes everyone in the audience feel they are so close to the stage they can feel its energy.

From the outside The Q is a large black box. Inside is a large auditorium and art gallery. The seats are comfortable and multi-coloured – combining with the wooden sound panels on the side to give the feel of the Australian bush.

This was the perfect for a production of Peter Combe’s Snugglepot and Cuddlepie the Musical which I attended in late May.

By then The Q had been opened for just on 15 months.

It took fifteen years of lobbying to come about.

Leading the push was the local amateur theatre – The Queanbeyan Players – which had spent twenty years entertaining the local community in the meagre conditions of a community centre.

All seemed to be going well for the first year. More than twenty thousand people bought tickets to see shows in the venue. Many others came in to enjoy the art gallery integrated into the venue.

Then came the financial result for the first year. Splashed across the front page of the local paper came the headline. “The Q: privatise or bust.”

A Local Coucillor called for an urgent review of the theatre because it posted a loss in the first twelve months of just under $800,000.

Councillor Steve Stavreas said the Queanbeyan City Council could not afford to support it.

“One option is to put [The Q] out to tender to private interests, with a possible subsidy from the Council,” he said.

“The worst case scenario is the theatre will cease its operations if an alternative is not possible,” he told the Queanbeyan Chronicle.

There was also scepticism about the value of the venue to locals, given that many people come from across the ‘border’ in Canberra to see shows at the venue.

“Many people from Queanbeyan tell me they drive into the centre of Canberra to work and love the fact that they can go to the theatre in their local community,” he said

Others sprung to its defence.

Another Local Councillor told the Queanbeyan Chronicle that visitors – attracted to the theatre - are welcome.

“They bring additional business … through overnight accommodation bookings and the restaurant business,” he said. (He is certainly right in my case – I only stayed overnight in Queanbeyan because of the theatre).

Making big ‘losses’ is not unusual for performing arts venues.

The Australasian Performing Arts Centre Association said three quarters of its members are venues owned by local Councils, and the vast majority are run with a subsidy in mind.

Management of the Q say that the loss is attributed to making an effort to have a wide program in the first year. Like other regional venues The Q buys in plays and musical events for a subscription season. These range from Menopause the Musical to Sadako and the Thousand Paper Cranes.

But unlike other regional venues The Q is producing its own amateur theatre musical. Stephen Pike is directing a production of the musical Chess.

With some Councillors querying the expense of running the venue, the pressure will be on The Q to make Chess worthwhile for ratepayers.

So far so good.

Making a profit from a musical in the A.C.T and its surrounds is not certain. The territory has a population of 350,000, but is now crowded with community theatre groups. Maybe public servants are born performers – because another two venues in Canberra itself are on the drawing board.

In Australia’s capital, all the world is a stage.