How to … take your production to the other side of the world. 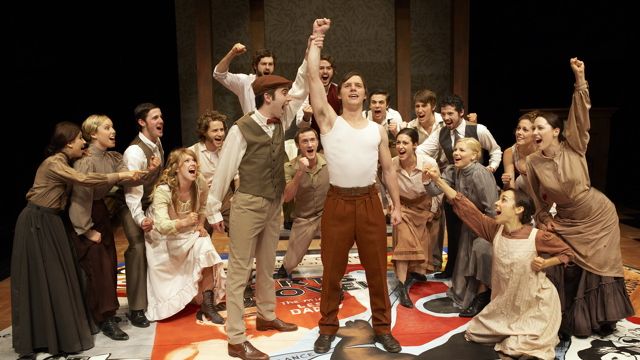 The Good Fight
The Western Australian Academy of Performing Arts (WAAPA) took its production of The Good Fight, from WAAPA’s home in Mt Lawley, Perth, to the New York Music Theatre Festival in 2007.
The festival is dedicated to developing and presenting music theatre pieces from around the world and features over thirty productions.
The Head of Music Theatre at WAAPA, David King, visited the festival in 2006 and met with the founder and artistic director, WAAPA graduate, Kris Stewart. WAAPA was extended an early invitation to participate in the 2007 festival, as the usual three months notice would be insufficient for a student tour of this magnitude. The selected students would be the graduating Music Theatre class.
The Good Fight was chosen for many reasons. Written by Nick Enright and David King, its premiere production had been at WAAPA in 2002. It was the last musical Nick Enright wrote. The Good Fight is quintessentially Australian but its themes are internationally relevant. It uses the story of Les Darcy, the great Australian boxer, as a centerpiece for a musical that moves from the battlefields of the First World War, to boxing rings and music hall stages in Australia and America.
The Third Year Music Theatre class had eighteen students, all of whom had roles in the production. They were joined by a student Lighting Designer and Production and Stage Managers.
The cost of the trip to New York was around $150,000. The students paid $2000 each, leaving a shortfall of around $110,000. This was raised through fundraising performances, Government grants and private donations.
Finances aside, the greatest challenge, was the sheer logistics of organising a trip of this magnitude. One challenge was booking flights to coincide with the best deals for student airfares. Another was liaising with a venue, on the other side of the world, that was to be shared with several other productions and thus accommodating the lighting and set requirements of three shows.
Integral to this success was having a very good student production manager - Daniel Jongen. The set consisted of three specially designed benches and a floor cloth, art-worked at WAAPA, depicting iconic images from the era of The Good Fight. It was too difficult and costly to transport the benches so exact copies were ordered to be ready for their arrival in New York. Malaysian Airlines freighted the 8’ by 6’ floor cloth, but difficulties arose when it was noted that freight trucks were not permitted into Newark Airport. “Somehow” noted director Crispin Taylor with a shrug, Daniel Jongen - with the assistance of lighting designer Glen Hunter, managed to get the cloth to the venue.

Each actor took their own costume in their luggage.
Bump in to the venue, the Julia Miles Theatre, was to be the morning of the first performance. Lighting designer Glenn Hunter had a creative solution to the lack of ‘on the spot’ preparation. Using a lighting program called WYSIWIG (What you see is what you get) and a plan of the generic rig in New York, he was able to completely preplot in Perth, knowing exactly how each of the cues would look. Transporting the software to New York meant a relatively easy bump in and rig.
Sound effects and sound plotting was prearranged in similar fashion. For the updated production David King had added a Korg keyboard. Programming the keyboard at WAAPA allowed a disc to be taken to New York to be used on an identical hired keyboard.
Three performances were given in the Julia Miles Theatre, a former church, converted to a 200-seat conventional performance space during the 1980s. Students were given technical duties before and after each performance, as WAAPA was sharing the venue so setting up and dismantling needed to be especially efficient.
The performances were very well received by both critics and the general public. Elyse Sommer’s Curtain Up review described it at as “an absorbing, achingly beautiful musical that transcends its Aussie roots.”
The final performance was attended by Australia’s Consul General in New York and his wife, who invited the cast and crew to a reception at their residence, where they met then Foreign Minister, Alexander Downer.
Just being in New York was a wonderful experience for both students and staff. With their performance in the first week of the festival, students were able to enjoy later festival performances as well as the delights of Broadway, with student prices giving excellent discounts much to the chagrin of their lecturers, paying five times the amount for shows.
It was the first trip to New York for many of the students and staff, the Australian accents made them noticeable and they were able to make contact with many Broadway performers and identities including Susan Stroman and Mel Brooks.
The Good Fight’s participation in the New York Music Theatre Festival generated unprecedented enthusiasm. This strong graduating class is already making their mark and they will be seen around Australia this year in Wicked, Altar Boyz, Hello Again, The Hatpin and many other productions.
Kimberley Shaw

Originally published in the May / June 2008 edition of Stage Whispers

From a Coffee Table to Broadway
Brent Street graduate Joel Houwen is dancing with Opera Australia and just won a scholarship to study in New York. He... more

Carousel Reimagined for a New Generation at WAAPA
“How often do you get the chance to work on a show that’s been labelled the best musical of the 20th... more

From Russia With Love
Oleg Glushkov brings the world of Chekhov to NIDA NIDA is continuing a partnership with the Russian Institute of... more