Staging the Biggest Shows on Earth. 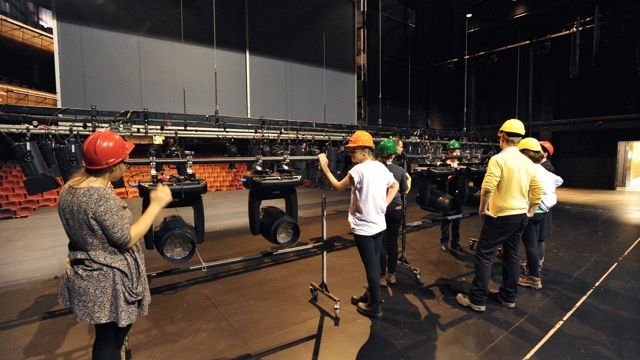 NIDA has upsized its old Scenery Course. So it’s out with making boxes and in with technical extravaganzas.

What was your favourite moment of the London Olympics Opening and Closing Ceremonies? Mine was a digitally resurrected Freddie Mercury leading the live 80,000 audience in a blissful recreation of his famous riff-along. How did they do that? In fact, how did ‘they’ seamlessly manage the two huge events with their astonishing mix of live mega-action, complex video, sound, lights and animation?

Now there’s a new undergraduate course at NIDA that aims to cover this brave new territory. The new Bachelor of Dramatic Arts (Staging) course starts next year and Head of Staging, Nick Day, can’t wait to get it going. “When I first started teaching at NIDA,” he tells me, “we had a Diploma in Scenic Construction which was about fabrication in steel and timber with a bit of history of theatre thrown in. We were in competition with TAFE carpentry courses.

“Then all the NIDA courses were re-accredited. At that time [2005] I had a clever student by the name of Joe Au and I got him a secondment in London with a massive staging company called Stage One which was just getting Priscilla Queen of the Desert into the West End. Now Joe had come to us from the University of NSW having done a couple of years of a computer science course so he had this great skills mix of computers and then building and mechanics. The head of Stage One rang me from London and said, ‘Have you got any more Joes?’ I said, sorry, I was fresh out of Joes, but then later I thought, ‘Well, we could make some’.”

“I worked on the Sydney Cats bump-in 30 years ago,” says Nick, “and I thought ‘this is just enormous,’ but it has just kept on growing. All the region’s production facilities come out of Sydney now. Big companies like Stage One, Qmotion and Stage Technologies are all here to service the South East Asia, Philippines, South Africa circuit.

“Within the large-scale musical milieu where everything opens and shuts there’s a need for a much more technically complex skill base, part structural engineer, part mechanical engineer, with a knowledge of computing and of data.

“And then there’s all the other areas— like film special effects, or major civic art installations. “In events like the Olympics ceremonies the hardest part technically is knowing exactly where everything is at any point in time. Obviously it only takes one little thing to go wrong for the whole thing to become a horrible train wreck. So the tracking of all those movements is probably the most incredible, mind-boggling part of the whole process.

“It’s all become so enmeshed these days – from film to animation to 3D manipulation of staging elements.”

Applications for the new Staging course close at the end of September. How many students will there be in the first year?

“Between four and six,” says Nick. “Most of our courses — Costume, Properties — have that number. There’s only so many people that the industry can take up on an annual basis.”

Someone should tell that to the Acting teachers.