The original Australian stage production of Jesus Christ Superstar, only the second in the world after New York,opened at Sydney’s Capitol Theatre in 1972 and ran for two years. It became the basis for the London production. During the Australian season there were several cast changes, but the one that blew the critics away was Reg Livermore as King Herod in one of the great show-stopping performances in the history of Australian musical theatre. It’s captured in all its outrageousness on this new live recording that has surfaced of a 1973 performance. Running twice as long as the track on the original concept album, he seduces, cajoles, and plays with the audience in a simply brilliant performance of “King Herod’s Song”.

Jon English is solid as Judas (his performance is captured on the original Australian cast album MCA MAP56244), as is John Paul Young as Jesus, but it’s Marcia Hines, the first black woman in the world to play Mary Magdalene, who is outstanding. She excels on “Everything’s Alright” and “Could We Start Again Please” and is just beautiful on “I Don’t Know How to Love Him”.

The performance was recorded, on his own equipment, by cast member Peter Chambers, who played various roles and was a cover for both Jesus and Judas. He has painstakingly restored the tape, eliminating all the clicks, bumps and grinds associated with live hand-held microphones in those days, and the result is a raw and exciting version of the show. Accompaniment is by a large orchestra led by Patrick Flynn, augmented by a rock ensemble which featured Michael Carlos on organ and Moog synthesizer. The production, directed by Jim Sharman, was also notable for bringing together two young singers, Russell Hitchcock and Graham Russell, who went on to form Air Supply, becoming one of Australia’s most successful pop groups and song-writing duos. Aztec Records are to be congratulated on this superb time-capsule of Australian theatrical history. It’s cause for celebration and deserves accolades. ***** Raw and exciting are also terms that describe Hayden Tee’s Face to Face, a collection of songs sung by rebels and antagonists. Last seen in Australia as Javert in Les Misérables, heopensthe CD with that character’s anthem “Stars” but then he also includes Marius’s “Empty Chairs at Empty Tables”, which he sang in his West End debut. Singing better than ever, his top notes on “Till I Hear You Sing” (Love Never Dies) are glorious, and a duet with his Les Miz co-star John Owen-Jones, of The Secret Garden’s “Lily’s Eyes”, is thrillingly passionate. A folk version of Dvorak’s New World Symphony is present in the backing of Jason Robert Brown’s “It All Fades Away” (The Bridges of Madison County), whilst a mash-up of Kander and Ebb’s “I Don’t Care Much” and “So What” (Cabaret) brings out the indifference and apathy of the characters. Best of all, however, are a riveting “Molasses To Rum” (1776) and his original cast West End performance of Miss Trunchbull’s “The Smell Of Rebellion” from Tim Minchin’s Matilda. Accompaniment is by the magnificent sounding 50-piece Budapest Scoring Orchestra, with excellent and inventive orchestrations and arrangements by Nigel Ubrihien. It’s a classy album of show songs from a performer at the top of his game. Highly recommended! ***** The soundtrack to this TV movie masquerading as a feature about Judy Garland and her last London stint and final days at Talk of the Town in the 60s features all of Garland’s signature tunes - “By Myself”, “The Trolley Song” and “Over the Rainbow”, and some that she sang which are not in the movie (“For Once In My Life”). Based on Peter Quilter’s cliché-ridden play The End of the Rainbow, the movie stars Renée Zellweger in a performance that’s been called Oscar worthy. She does give a good performance and while you’re watching the movie you accept her vocal interpretations, but divorced of the images it comes across as merely competent. The songs lack the Garland throb, but there’s some great big-band arrangements of her catalogue which mirror Garland’s originals. Sam Smith duets on a driving “Get Happy”, with Rufus Wainwright doing likewise on “Have Yourself a Merry Little Christmas”. *** Although it captured 11 million viewers, Disney’s latest live action TV event was criticised for having too much animation and not enough live performance. Despite that, the cast, headed by Queen Latifah, has a great deal of fun with Alan Menken and Howard Ashman’s Caribbean flavoured delight. “Under the Sea” is insanely infectious, as is the calypso ode “Kiss the Girl”. Graham Phillips is a virile Prince Eric hero, leading the ensemble on “Fathoms Below” and being dreamily romantic on “Her Voice”, whilst Auli’i Cravalho sounds lovely as Ariel, the underwater heroine, in “Part of Your World”. John Stamos reprises his movie role as Chef Louis on “Les Poissons”, but it’s Queen Latifah’s Ursula that’s irresistible. Her “Poor Unfortunate Souls” is deliciously dark. *** 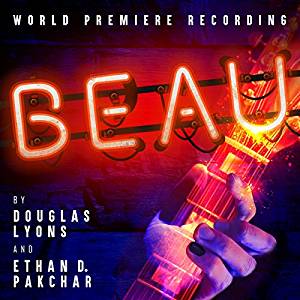 It’s not often a major label releases a regional production but that’s the case with New York based Douglas Lyons (lyrics) and Ethan D. Pakchar’s (composer) Beau, which premiered at the Adirondack Theatre Festival in 2019. The plot tells the story of Ace Baker, who at 12 discovers the grandfather his mother intended to keep secret - a man who changes Ace’s life forever by putting a guitar in his hand. The music and lyrics nod towards Pasek and Paul’s work in that they’re poppy but have individuality in this likeable funk-rock score. “Coming Home” is tender, “Thursday in July” documents first love, whilst “Disappear” has some full vocal diva screams. The single release, “Runnin’ ”, finds Matt Rodin joyously reflecting about love and self-worth. *** The Encores! 2017 production of Cole Porter’s 1930 musical The New Yorkers has spawned a cast recording and it’s a gem. In one of their most extensive reconstructions, Encores! have pieced together a version of the original score plus some interpolations from other Porter shows. It’s a great compilation which does Porter proud. The story - which involved broads and sugar daddies and a gangster who wants to take-over New York’s caviar market - had tons of Porter’s famed wit in a dazzling array of songs. Summer Strallen kicks up her heels to a frenetic Charleston version of “Most Gentlemen Don’t Like Love”, warbles winningly on “Night and Day” and couples nicely with Tam Mutu on the languid “Where Have You Been” and the all-stops out finale “Take Me Back To Manhattan”. Robyn Hurder registers early with “Please Don’t Make Me Be Good”, Ruth Williamson scores the laughs on “The Physician”, whilst Cyrille Aimee is seductively sexy on the show’s enduring hit “Love For Sale”. Porter’s wit has never been droller than in “Say it With Gin”, a first act number for the Male Ensemble that mentions Gordon’s and Gilbey’s et al. The show closes with Porter’s paean to the Big Apple, “I Happen To Like New York”, sung by Strallen and the company. It’s vintage Porter, vintage Broadway, and delightfully zany. ****

Stage to Page 2020
A Million Miles From Broadway – Musical Theatre Beyond New York and London – Revised and Expanded Edition... more