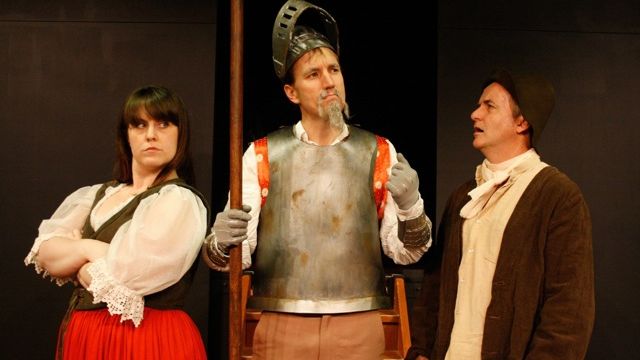 Man of La Mancha is the story of Miguel de Cervantes, a failed author and poet in 16th century Spain. Imprisoned to await trial by the Spanish Inquisition, and placed before a mock court of his fellow prisoners, he attempts to save the manuscript of his book by giving a performance of the story - the tale of a man who imagines himself to be a gallant Knight, Don Quixote de La Mancha.

The show combines conscious theatricality, high farce and comic situations, but it is ultimately a moving example of human idealism and determination, and is unashamedly naïve and optimistic in the face of the reality of life.

NUCMS Director Kent Blackmore has been thinking about producing the show for several years. “I first played around with ideas for the show about three years ago” he says. “With so many productions playing in Sydney, it has taken until now to pull the team together.”

Blackmore has previously directed Godspell and sees similarities between the two shows. “Both are stories of transformation and redemption. Although the author of Man of La Mancha denies any intentional connections to religious themes, there are themes which can be seen to relate to a Christian message. Like Godspell, it is a show which quietly draws the audience into a deep emotional involvement with the characters of Don Quixote and Aldonza.”

Jeff Fisher is Musical Director and Mel Warwick is Choreographer.