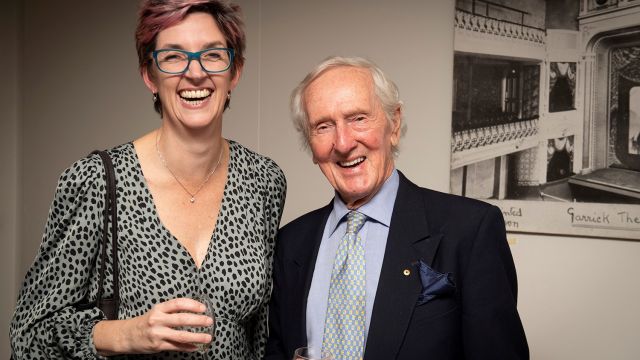 At a Christmas gathering at the new premises of the Seaborn, Broughton & Walford Foundation in Neutral Bay recently, the successful recipients of its 2018 Grants were announced. The Foundation provides financial and practical support for a wide variety of individuals and organisations involved in Australian theatre and performing arts including the funding of an annual grants program.

Thirty nine applications were received and ten projects, events and individuals were successful in receiving a total of $128,000 in grants. They are:

A special additional grant of $25,000 for a Sydney premiere concert version of Cloudstreet The Opera at the City Recital Hall was awarded to a group which includes the Omega Ensemble.

The Seaborn, Broughton & Walford Foundation also announced that Katie Pollock has been awarded the 2018 Rodney Seaborn Playwrights Award for her play People Inside Me. The $20,000 award for the development of a play or other approved performing arts project, attracted 65 entries from all over Australia this year.

Foundation President Peter Lowry OAM said, “This has been a good year for new plays, and that the script assessors agreed that the 2018 entries represented the best collection of unpublished scripts read in over 40 years with at least 28 considered worthy for the short list. The Assessors felt that we could be entering a 'golden age’ of Australian playwriting and were particularly impressed by the number of plays in which women talk to each other with convincing authority.”

Katie Pollock was thrilled to receive the award, and said, “The biggest thing this award would give me is time. The play is in an early draft stage; it needs dramaturgical input, workshops with actors, rethinking, rewriting, more feedback, another rewrite, and another reading. Winning the award will enable me to do all this.”

The other shortlisted plays for the 2018 Rodney Seaborn Playwrights Award were:

Nicki Bloom - The Sun and the Other Stars

The Seaborn, Broughton & Walford Foundation was founded in 1986 by Dr Rodney Seaborn AO OBE as a charitable organisation to benefit the Australian Performing Arts. It originated when the Griffin Theatre Company, who were doing such valiant work in promoting, Australian plays and playwrights, appealed for somebody to save the historic Stables Theatre at Kings Cross. The Foundation purchased the Stables Theatre and the Griffin Theatre Company has benefited by having a rent free theatre (less outgoings) since 1986.