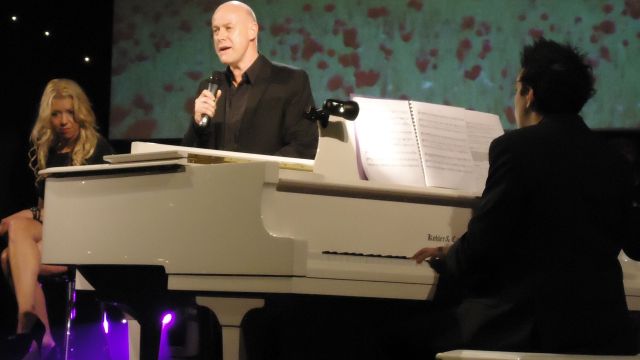 Anthony Warlow wowed group bookers on Tuesday Night with a beautiful rendition of two songs from the new musical Dr Zhivago, which will have its main stage world premiere in February next year in Sydney.

The musical, with a score by Lucy Simon, the composer of The Secret Garden, had a try-out at the La Jolla Playhouse, San Diego, California, in May 2006.

But the chance to have Anthony Warlow play the leading man, interest from Producer John Frost, and more effective cost structures has led to Sydney scoring the main-stage premiere.

The Wentworth Hotel in Sydney was packed with group bookers, who gave an enthusiastic reception on hearing the two songs for the first time.

Anthony Warlow says he is confident the show will take off.

"This is a dream for me. When I listen to the music I always get teary. What a great opportunity for an actor to do it this," he said.

"There is something about this project which has which resonated with me. When I first saw the film with Omar Sharif, I always thought it had an operatic sense."

However the famous musical theme from the movie is not in the show. All the score is original.

At the launch the composer Lucy Simon, sister of Carly Simon, sang a duet with Anthony Warlow.

The role has prompted the star to do lots of homework.

"I am a research nut; if I have a character I eat everything up about the work. When I read the novel the first 100 pages was hard work but then you get into the beautiful poetry," he said.

The singer says the role is the embodiment of his life.

"There is the little boy, the father and the lover," he said.

Dr Zhivago, to be directed by Des McAnuff (Jersey Boys), will premiere at the Lyric Theatre, Star City, on February 2011.

Dr Zhivago The Musical In Rehearsal.