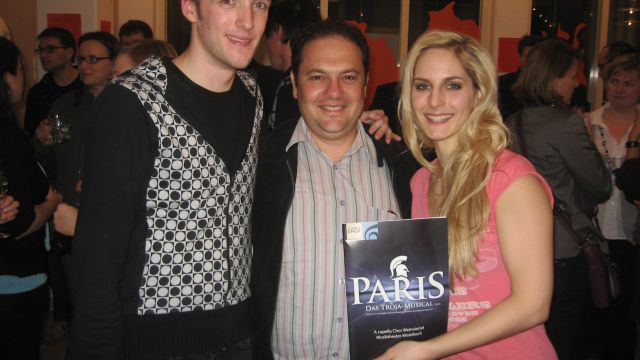 In what must be a first, an Australian Musical has been staged in Austria – fully translated into German. Not only did the theatre company premiere Paris by Jon English and David Mackay – the performance was almost a carbon copy of a recent Australian production.

The agent for the show David Spicer traveled to Austria to see Paris. Whether you’re confused, or not, read on.

If I had been asked at the border, any customs official would have been puzzled. Yes, I am in Austria to see Paris. Yes, I know Paris is the capital of France. I am talking about Paris the musical, the rock opera by Jon English and David Mackay about the Trojan War.

Sometimes being a musical theatre agent can take you to the most unlikely places. From Vienna our taxi driver took us on the one hour drive north to the small town of Mistelbach. We drove through fields and giant wind farms.

The town looked rather small. I wondered, “Will they have the talent to stage this show, which requires an ensemble of powerful singers?”

It was hard to find the theatre and it had a modest look from the outside. As we walked in the tension eased. A very crowded foyer is a soothing sight to an agent. Then they squeezed us into seats A1, A2 and A3 at the front. A full house brought even greater comfort.

Then the curtain rose and I couldn’t stop smiling. The orchestra was strong and powerful – and wait for it … almost every aspect of the production was identical to one I staged in Gosford on the New South Wales Central Coast in 2008.

I kept scratching my head. Am I in Mistelbach or Gosford?

In Australia director Stuart Smith designed a clever Greek style amphitheatre, which had a trap door to allow for a mast and escape route. The front of the ‘ship’ poked out the front allowing the crew to pull on ropes.

The Austrians saw the video and copied it. In our production we had a very slender budget for costumes, incorporating trench coats for the men. They replicated this also.

Then came the appearance of The Trojan Horse. I helped slap this together the day before our opening night when our first plan failed. I bought a pile of fence palings to help build our Venetian Blind style Trojan Horse.

The Austrians took this as a stroke of genius.

Overall I beamed like a Broadway Producer going to the West End to see an identical production to the original.

But it wasn’t just a copy-cat production. The theatre company (a choir that stages a musical every two years) took the production to the next level. Projected onto the back were images of the ocean or other scenes to add a new dimension to the action.

Paris and Helen of Troy were both professional singers who were lovers in real life.

The young man who played Paris was a singer from Germany, but leapt at the chance to shack up with his Austrian girlfriend for four months, even though the pay was slight.

What about the language you ask? Was it in English or German?

Paris has now been performed almost 20 times in four different countries and this was the strongest all-round production to date.

See excerpts from Paris at www.davidspicer.com.au/shows/paris