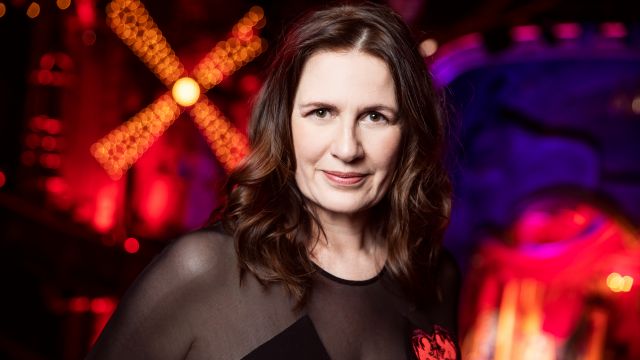 With news that Broadway is officially closed until 2021, we speak with Carmen Pavlovic - the CEO of Global Creatures – producer of what was Broadway’s number two bestselling musical Moulin Rouge! In February Carmen was jet-setting to LA for the Grammys, back to Sydney to see her family, off to Bahamas for a conference, then New York and back to Sydney for her son’s birthday. Now we speak to Carmen again about how her life and the theatre world has changed.

Stage Whispers: What (did) you love and loathe about New York?

Carmen Pavlovic: I love the diversity and culturally NYC is like nowhere else in the world.  Broadway itself is a genuine community and the standard of work is so high that it is thrilling and engaging. I saw the six-hour epic The Inheritance in December. It’s now early February and I have thought about it every day since because it was so powerful and so moving.

I also saw Slave Play, which was so insightful. It really stretches your mind to be part of a community at the forefront of current thinking regarding so many issues around race and gender.

I could do without the sirens, although I am becoming more and more blasé about them. I find the homelessness really confronting. My children’s constant questions about the how and why and what to do to fix it are so hard to answer. Oh, and I wish the food portion sizes were smaller. They kind of freak me out. And that a good cup of tea was easier to get!

Stage Whispers: What additional challenges are there on Broadway producing original musicals in comparison with Australia?

Carmen Pavlovic: I’ve kept the centre of the company in Australia, so distance and time zones are probably the biggest challenge. The international profile of Broadway is so great that success and failure each have such high stakes. But in most other ways it is easier. Broadway is geared to produce new work whereas new musicals in Australia remain a bit of a novelty. As such, the appetite for risk and the available investment is dramatically higher in New York.  The Broadway community is really structured in its approach to deal making and investment and the established practices give you neat guidelines on many issues. 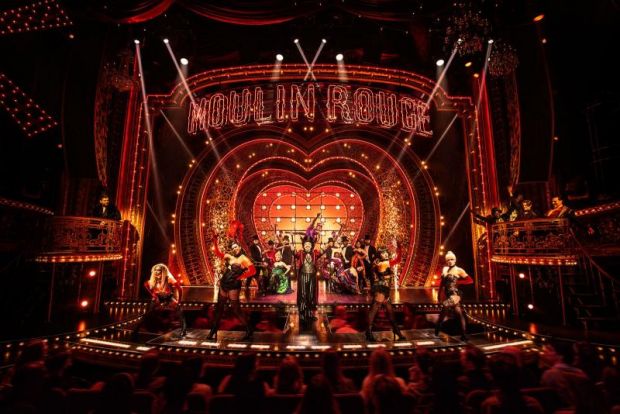 Stage Whispers: With Moulin Rouge you found the winning formula. What have you learnt from producing other shows that held you in good stead?

Carmen Pavlovic: I don’t think there is a winning formula that can be found and rolled onto the next show as a guarantee of success. People only see a formula as ‘winning’ in hindsight.  On paper, you can cast the best creative team with the best title in the world but whether that team will find alchemy; whether we will all realise the same vision, is unknowable in advance.

At the same time, naturally I have learned so much over the last decade. Moulin Rouge! has benefitted from every good and bad decision we have ever made and I don’t think our company would have produced this version of Moulin Rouge! on Broadway at this time without everything we have done before it.

Stage Whispers: How thrilling was it to read positive reviews for a new project?

Carmen Pavlovic: It is obviously a thrill and probably just more of a relief than anything. Even though we received an amazing review from Ben Brantley from the New York Times in Boston, none of us assumed that would be repeated by him again on Broadway. We decided to keep our heads down and do the work and to take nothing for granted. In NYC the reviewers all come in before Opening Night, so reviews start appearing online as the curtain comes down. Consequently, you end up reading them on the way to, or at, the After Party. Over the years I have experienced the very worst and the very best of reviews and plenty of mixed ones in between. But I always say it is the same people with the same appetite for creative risk; and the same preparedness to take a big bold swing behind each show. No review, whether good or bad, changes that.

Stage Whispers: How hard was it getting the song publishers to agree to let you “slice up” the songs?

Carmen Pavlovic: The score of Moulin Rouge comprises 70 songs, representing the work of 160 composers. Each song requires permission from the composer/s and publisher/s, both in terms of the creative use in show and financial deal. I think MR is the most complex music licensing ever undertaken for a Broadway show and took us many years to achieve, with many curveballs. The cast album required a different set of rights to be cleared all over again, so getting the show rights in place in time for opening and for the cast recording to take place four days later was a massive undertaking for our company. The rights process and outcome certainly feature as a highlight in the story of our journey to Broadway.

Stage Whispers: Now that it has momentum, will it run for a decade on Broadway?

Carmen Pavlovic: I’m delighted with the early critical and commercial success on Broadway and I hope MR can sit on Broadway for a long time. Beyond that, I take nothing for granted. I just keep one foot in front of the other while we chip away at the international roll out of our existing titles.

Stage Whispers: Where do you live when you are in New York?
Carmen Pavlovic: All over the place! We relocated to the US for most of 2018 because we had Moulin Rouge! opening in Boston in July, the Walking with Dinosaurs world tour starting in the UK in July and King Kong opening on Broadway.

We home-schooled the kids for that period, so we had a teacher living and travelling with us. It was a nightmare of logistics and upheaval. We settled in an apartment in NY right by Central Park. It had a pool so the kids could get outdoors and keep up their swimming, which is much harder to do in NY than Bondi!  Eddie Perfect and his family lived a block away so his super cute kids would often come over for a hang out.

The rest of the time, if the kids are with me for short trips we stay in a short-term apartment. If it’s just me, I stay at a hotel. I have a bag that I leave in New York with weird things in it like a water filtering jug and band-aids and rubber bands! 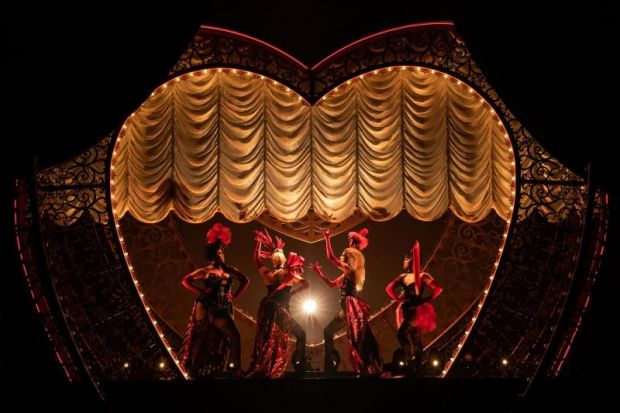 Stage Whispers: How do you now balance managing a musical in NY with a young family in Sydney?

Carmen Pavlovic: I’m not sure that I do! The word ‘balance’ also freaks me out because it feels like a bar I am constantly failing to reach. Frankly, we spend most days on the edge wondering how the hell we are going to get through the next few months.

Inevitably the great opportunities my family have had go hand in hand with great sacrifices.  Travel is incredibly expanding for kids. They go to fun opening nights and see lots of great shows. On their first day of school in New York they went on an excursion to the United Nations building and watched a sitting. Yet they spend too much time longing for their mother and I for them. I feel physically strange and discombobulated without them. My arms feel weird. People often try to comfort me with “You’re being a great role model”, and I hope that is true, but when your kids are crying to you on the phone it is very hard to tell them, or yourself, that you are being a great role model.

When (my husband) Pete (England) and I are both rehearsing the same show, it is bloody because there is that inevitable period of months where we are both in the theatre day and night.  King Kong on Broadway was so hard in that respect. Although the kids did come and hang at the theatre a lot of nights with Eddie Perfect’s kids.

I simply could not have produced Moulin Rouge! on Broadway without Pete being prepared to lead the domestic front. I’m happy for the kids that they have this incredible relationship - that they can experience a man in the role of primary carer. But I can’t pretend that doesn’t give me complicated, and defensive, and sad feelings about whether I am a good mother. And then other times I just slap myself and say ‘Shut up! We are so privileged, and the kids are so bloody fine’.  I mean parenthood is essentially an exercise in managing your own guilt no matter who you are and what you are doing, isn’t it?

Stage Whispers:  How has your life changed since we spoke in February?

Carmen Pavlovic: Doesn’t February feel like a lifetime ago!

On a personal level I’m grateful for whathasn’t changed – happy and healthy family, colleagues I can rely on and to be in country that has put so much emphasis on keeping us safe.

Professionally, there is no skirting around the fact our industry is hurting. Everyone in entertainment is facing a huge amount of uncertainty every day and it’s really testing people’s resilience.

When the shutdown happened, we were mid preparations for three additional productions of Moulin Rouge! The Musical - the US Tour, London and Melbourne. That is still all happening but the workload has increased exponentially as now we’re planning three or four scenarios for every decision, from casting to costuming.

But every day I have my coffee and I am resolute that we will get theatres open again, wewill get our cast and crew back in work and we will be able to get off Zoom!

Stage Whispers:  Are there some aspects of the lockdown you are surprised that you are enjoying?

Carmen Pavlovic:It has been great to leave the suitcases in the cupboard and be around to cook dinner every night for my family and do more of those domestic things.

I joke about Zoom, but it’s delivered some really lovely and unexpected moments. My daughter has been doing Zoom baking with her grandmothers, learning the recipes that they baked for us as kids. I don’t think we would have thought to arrange that without being in lockdown.

I've also watched all of Schitt's Creek with my kids and it's the first time we've watched a TV series together. 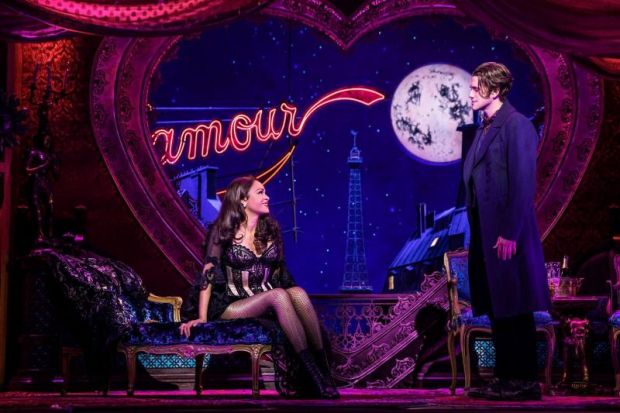 Stage Whispers:  When do you think Broadway will re-open?

Carmen Pavlovic:I don’t think anyone really knows and that is a tough lesson in managing uncertainty. I’m hopeful for early 2021.

Stage Whispers:  What do you think will be different about the theatre experience when it does re-open?

Carmen Pavlovic:  I for one will savour it more. For most of us in the industry, this closure will be longest time in our lives we have not stepped foot in a theatre, and the loss really is profound. Suddenly all those clichés about theatre being a spiritual experience, and a show being able to give people a memory for a lifetime, seem not so cliché anymore!

So, in an unexpected way, I suspect the closure will end up electrifying the whole theatre experience when we do re-open.

Stage Whispers:  Can Australia still be confident of seeing Moulin Rouge! next year in Melbourne?

Carmen Pavlovic:  Nobody is speaking in absolutes about anything these days, but yes we are working towards the return of Moulin Rouge! The Musical to Broadway, followed by the international rollout including Melbourne 2021.

Of course all our plans are subject to government restrictions, but it’s no secret that bringing the show home is very important to us as a company. I really can’t wait for Australians to see it.