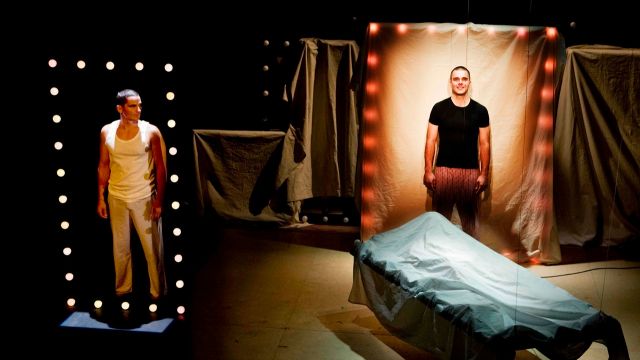 David Spicer reports on a remarkable purple patch for Australian producers in London.

During June something remarkable has occurred in the West End, with no fewer than five shows either written, created, composed or produced by Australians on stage.
Priscilla Queen of the Desert – the Musical, written by Australians and produced by Back Row Productions, is settling in for an open-ended run. Dirty Dancing the Musical, produced by Kevin Jacobsen and Col Joye, is still doing excellent business.
Tap Dogs returns for a twelve week run. The Tommy Murphy play Holding the Man is having its West End Premiere and Through a Glass Darkly, a play adapted by Andrew Upton, is opening at the Almedia Theatre.
It appears there has never been a better time to be an Australian theatre-maker in London.
Garry McQuinn from Back Row Productions knows more than anyone why Australians are making it big. His company is behind Priscilla, Tap Dogs and co-producing Through a Glass Darkly.
“I can’t think of a time when this has happened before. We should be proud of our Australian style, of our have a go approach,” he said.
Garry McQuinn says a common thread is that Australian producers “think outside the box and think laterally.”
While touring Tap Dogs across Europe, he also relished the fact that “no-one tends to hate Australians and everyone either wants to go there or has a relative there.”
In the UK he says it is slightly different, with some people tending to patronize Australians.
But now he says the UK public has adopted Priscilla much like they have adopted Kylie Minogue and Jason Donovan (who is currently played the role of Tick).
Word of mouth has kicked in, allowing for an open-ended run that could extend for years.
“It is a show about drag queens that has appeal to a broad theatre audience. From Australia and New Zealand we knew we had a show that worked. In London we didn’t have a home town advantage,” he said.
“We had to drive to get those early audiences and hold our breath. Now that word of mouth has kicked in, it is booking very well. It is a fairly non-traditional audience, beyond the hard core theatre goers and gay audience and solidly into what we might call in Australia the western suburbs audience.”
Having conquered The West End, Priscilla is now set to become a global phenomenon. The big one is of course Broadway. A US $15 million production is kicking off in March 2011, after a 12-week try out in Toronto.
“We are now at base camp, about to climb Everest,” he said.
Garry McQuinn describes Broadway as a cut-throat and highly competitive environment to work in.
Helping Back Row Productions will be their very own good luck charm, Tony Sheldon.
For two and a half years he played Bernadette in Sydney, Melbourne, Auckland and the first year of the season in the West End.
Garry McQuinn revealed that Tony will also play the role on Broadway.
“He is definitively the most brilliant. I can’t think of anyone else. We have rested him after a year. He is the ultimate professional,” he said.

Tony Sheldon has played the role for two and a quarter years and had racked 12 or 1300 performances. Then EU rules obliged the producers to rest him.
“He hated taking a break, when we forced him to take a holiday he became quite distressed,” Garry McQuinn said.
Tony is tickled pink.
“I'd always hoped that one day I might play an Australian character in an Australian musical in New York, but I assumed the opportunity had passed me by,” he said. “It just goes to show that it's never too late! And with all my heart I thank the Australian producers and production team for standing by me these past four years and having the faith in me to create the role of Bernadette on Broadway.”
In advance of the Broadway opening, Priscilla is in demand across the world.
Offers to stage it have come in from South America, Italy, Portugal, Spain, Scandinavia, South Africa, Singapore and Japan.
Once a smaller scale international touring production is underway, the producer says it will be viable to stage it in Brisbane, Adelaide and Perth.
The big bus has many kilometers to run.

Tommy Murphy speaks to Stage Whispers about his  experiences with Holding the Man in London in our July / August print edition. Pre-order your copy at www.stagewhispers.com.au/products

Photo: Guy Edmonds and Matt Zeremes in the London production of Holding the Man.