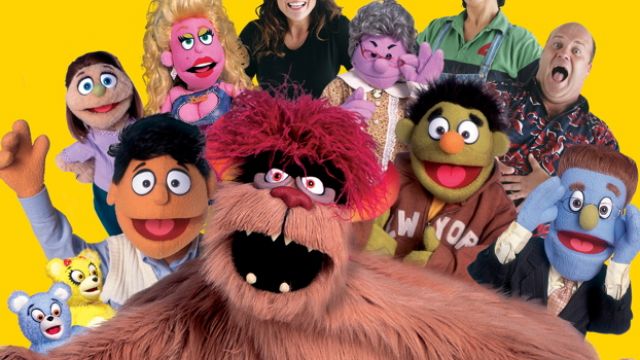 Coming to a street in Australia and New Zealand near you.

You gaze up at the billboard.
Ah, puppets. They look like Sesame Street. What a charming little show to take the kiddies to.
Oh, but there is a sign – not for kids.
What do those puppets get up to?
The Director of the Avenue Q, Johnathan Biggins, knows exactly what those puppets get up to.
“My nine-year-old twins are dieing to see it, but father knows best,” he said.
For a start this is a show with sex. Puppet sex of course.
“The Puppets only go down to the waist. The rest is left to imagination.”
But be warned - puppets are very flexible.

And then, how would you explain this song to a child.

Avenue Q is in fact almost as politically incorrect as possible. Other songs include "Everyone's A Little Bit Racist" and "If You Were Gay,"
I was lucky enough to see the show on Broadway in 2005. The audience was filled with 20 and 30 somethings - people who might not normally go to a musical.
At the time the billboards screamed, “We won the Tony!”
It should have added, “and Wicked didn’t”.
Johnathan Biggins says the success of Avenue Q is very much about an underdog done good.
“The writers are still surprised at their success.”
Ironically the core theme of the musical is about failure.
“It is about life not always turning out as you expected.”
The central character of Avenue Q is Princeton, a bright-eyed college grad who comes to New York City with big dreams and a tiny bank account.
He soon discovers that the only neighbourhood in his price range is Avenue Q.
There’s Brian, the out-of-work comedian, and his therapist fiancée Christmas Eve, the internet addict Trekkie Monster, a cute kindergarten assistant Kate Monster and Gary Coleman.
Their lives also intermingle with renowned nightclub singer, Lucy the Slut, and school principal, Mrs. Thistletwat.
Together, Princeton and his newfound friends struggle to find jobs, dates, and their ever-elusive purpose in life.
Most of the characters are puppets. In traditional puppetry those ‘pulling the strings’ are invisible or act as though they are invisible. In Avenue Q they are very much part of the action.

Following it's current season at the Canberra Theatre Centre, Avenue Q plays at the Regal Theatre, Perth from November 20, then Her Majesty's Theatre, Adelaide, from 1 January.