Behind the Scenes at Muriel’s Wedding 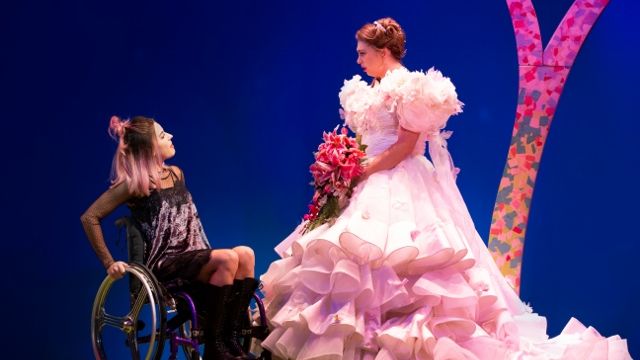 A visit behind the scenes of hit musical Muriel’s Wedding reveals a massive number of wigs, a costume so huge it must be hung high overhead and a way that audience members can join the cast onstage. Simon Parris reports

Premiering back in 2017, the sold out, award-winning Sydney season of Muriel’s Wedding The Musical paved the way for the current, long awaited Australian tour. Melbourne’s Her Majesty’s Theatre is bedecked in festive yellow, flecked with pink confetti, reflecting the joyful spirit of the acclaimed Australian musical gracing its storied stage.

While the audience see 28 cast members play a wild variety of roles on stage, an even bigger team works backstage so that the musical version can include the myriad scenes and characters first seen in the iconic 1994 movie. Before the performance, the backstage area is a hive of activity, with crew members checking and testing sets, repairing props and styling wigs.

Three of the wig stylists are at hand, and they proudly state the number of wigs as totaling more than 160. Apart from a few scenes with male cast members, almost no actor is seen with their own hair during the show.

Wigs and costumes are all preset at stage level, ready for fast changes during the show. There are so many fast changes, in fact, that hardly any costumes are actually stored in the actors’ dressing rooms. Special areas include the bridal boutique, which houses the wedding dresses, and there is an entire room that is solely assigned to the costumes, wigs and accessories of Muriel, played by newcomer Natalie Abbott. 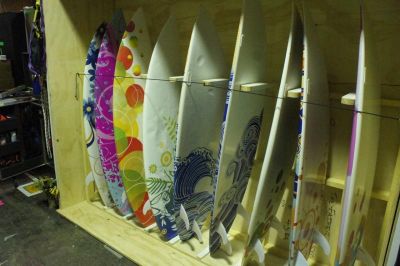 A team of six dressers is employed to assist the cast during the show. The fastest changes have to take place right in the wings, with portable black partitions available to create a degree of privacy.

Ms Abbott took a moment from her pre-show preparation to talk about those lightning fast costume changes. After Muriel reconnects with Rhonda, the pair dons ABBA outfits for the cruise ship’s ‘The Unicorn’s Got Talent’ show. Ms Abbott described this change as the one that was trickiest to master during stage rehearsals: “the one that was hardest to get was probably the “Waterloo” quick change. But we nail it now; now we’ve got it, I could almost have a cup of tea!”

On a giddy high from the talent show victory, Muriel and Rhonda sit on the beach and cement their friendship in the song ‘Amazing’. Seconds later, Muriel is home from the cruise and back in Porpoise Spit. Ms Abbot explains, “going from ‘Amazing’ back into the Heslops right before ‘Sydney’, that’s my quickest change.”

As with costumes, set pieces are close at hand, with act one items standing by before the show. It takes the entire interval to change over the standby sets, bringing pieces such as the bridal shop trucks forward in preparation for their use in act two.

Muriel’s Wedding features brightly coloured backdrops by master designer Gabriela Tylesova. The original Sydney season played at the Roslyn Packer Theatre, a venue which is a mere 15 years young, and the scenic design was fully automated. At Her Majesty’s Theatre, three men work in the fly tower, raising and lowering backdrops with split second precision as the show unfolds. 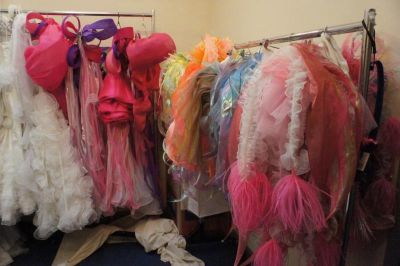 Looking overhead, most of the backdrops are clearly identifiable, but there is one odd item, hanging high overhead, slightly to the side of stage. For the climactic wedding of Muriel and Olympic swimmer Alexander Shkuratov, Ms Tylesova designed a dress so grand that the only place it can be stored is overhead. When the time comes, the dress is lowered to stage level, with its calico bag spreading out on the floor to protect the pristine gown.

Nightly variation is part of the excitement of staging a live musical, particularly one with a long season. At this performance, ensemble member Josh Robson is playing the featured role of ABBA member Björn Ulvaeus. The modification actually involves three changes of cast, with swings Jan di Pietro and David Ouch joining the ensemble on stage tonight.

With so many characters to be portrayed, almost all of the cast members in Muriel’s Wedding play multiple roles. The primary character played by versatile stage actress Chelsea Plumley is vapid beauty consultant Deidre Chambers. Ms Plumley took a moment out of pre-show preparations to discuss the favourite role she plays in the show besides Deidre: “Oh the Bridal Manager! Act two bridal manager is fun to play.” 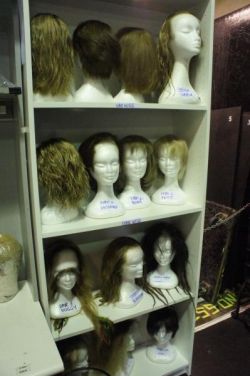 Ms Plumley has worked on distinguishing the two roles: “They have different psychological gestures. Well, I don’t think there are any small roles. I treat every small role as if I’m a leading lady.” Ms Plumley also described the differing vocal requirements: “One’s up in the gods. Deidre’s very high, with C sharps. And I think I’m G or F with low down notes as the bridal manager. It’s a nice challenge to sing over two and a half octaves in one night.”

Preparations for the cast intensify as the curtain time draws closer. With the stage in use for induction of a couple of new technical crew members, warm-up is held in the rehearsal room, which is off the cast green room up two flights of stairs. As dance captain Jan di Pietro takes physical warm up, company manager Victoria Wildie points out the stored table tennis table, noting that there is currently a fierce tournament running.

Many of the male cast members appear shirtless in the beach or pool scenes, so it is no surprise that some of the men take the chance to do some extra sit-ups as part of warm-up. There is a positive, relaxed yet focused vibe amongst the cast, and the physical warm-up ends with applause before segueing straight on to vocal warm up. Musical director Daniel Puckey pops into the rehearsal room to check that all is well.

Another pre-show duty of Ms Wildie and stage manager Elise Stewart is to brief the audience members who will come on stage as wedding guests. This unique aspect offers the thrilling opportunity for ticket buyers to come backstage during the show and then to sit on stage during Muriel’s wedding.

Having been allocated a pew, the guests are briefed on stage by Ms Stewart, who describes where to stand backstage, when to enter and how to avoid dizziness as the set revolves. To add to the social media angle, the guests will be given fake mobile phones, and Ms Stewart warns not to be alarmed when the confetti cannons are fired. One last piece of advice is relevant to the theatrical leanings of the guests, as Ms Stewart firmly tells the guests: “Don’t sing!” 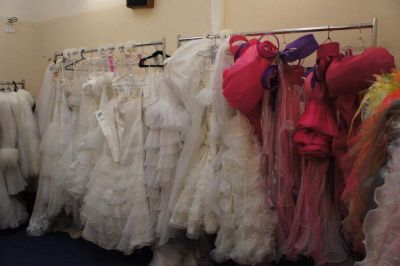 Isolated from the backstage action is Brendon Gardner, who singlehandedly operates the elaborate sound desk, which has six screens, dozens of multi-coloured knobs and dials, plus a small monitor showing Mr Puckey. Conducting the performance, Mr Puckey often plays the keyboard, at which time he simply conducts with a smile.

Sitting in the back two rows of the theatre, the wedding guests are collected during the swimming training scene, where Muriel meets Russian Olympic hopeful, Shkuratov. Heading backstage for the big moment, the cast members are seen in high spirits as the evening’s performance is proceeding smoothly and successfully. Playing father of the bride Bill Heslop, David James beams as he shakes hands with some of the guests.

Almost all cast members have a fast change into the wedding, none more so than resident mean girls turned bridesmaids Tania (Christie Whelan Browne), Cheryl (Catty Hamilton) and Janine (Imogen Moore). Dressers have employed the black partitions in the wings as the girls come off from social media homage “Shared, Viral, Linked, Liked,” changing from breezy summer wear into outrageous hot pink confections that are designed to make a splash at Muriel’s insta-wedding. 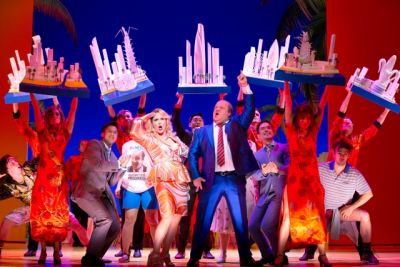 Muriel’s big dress has been winched down to stage, and Ms Abbott has changed and entered the scene, smiling as Muriel is photographed by the guests with their prop phones. The crew can catch their breath for just a second, but soon the dressers are repositioning the partitions for the next quick change, the confetti cannons fire and it is time for the guests to depart. Returning to the auditorium for the final portion of the show, the guests are given a wedding favour to take home as a souvenir of the experience.

Having been onstage for almost the entire show, Ms Abbott has been taken into the hearts of the audience. Entering for her curtain call, Ms Abbott wears one last Gabriela Tylesova creation, which is reserved for Muriel to wear in the bows. The evening ends with an enthusiastic standing ovation, which is centred around Ms Abbott’s curtain call.

Muriel’s Wedding played at Her Majesty’s Theatre, Melbourne until 16 June, then at Sydney Lyric Theatre from 28 June, and Lyric Theatre, QPAC from 19 September. Specially priced Onstage Wedding Guest tickets are available from the regular ticketing agency for the season in each city.