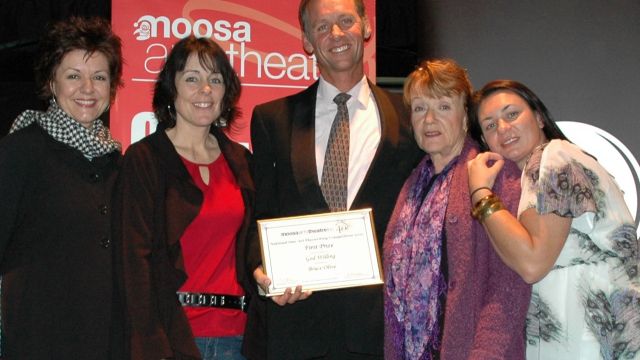 Inspired by the Mumbai Hotel bombings, God Willing explores the motivations behind terrorist activities. A young female terrorist grapples with her conscience as she holds a pregnant aid worker hostage.

Having taken up playwriting when he moved to the Sunshine Coast 10 years ago, several of Bruce’s previous plays have won smaller awards.

Second place went to Paul Addison, a school teacher from NSW with a comedy The Usual Five for Lunch.

Tudo Ou Nada is described as very funny little play about a young couple who bring their parents together for the first time, despite having been living together for some time.

From vastly different cultural backgrounds, one embarrassingly Australian, the other, very traditional Catholic Portuguese, skeletons come out of the closet from both families, much to the amusement of the audience.

Playwrights interested in entering the 2011 playwriting competition, should visit the Competitions page online at: www.noosaartstheatre.org.au for further information.