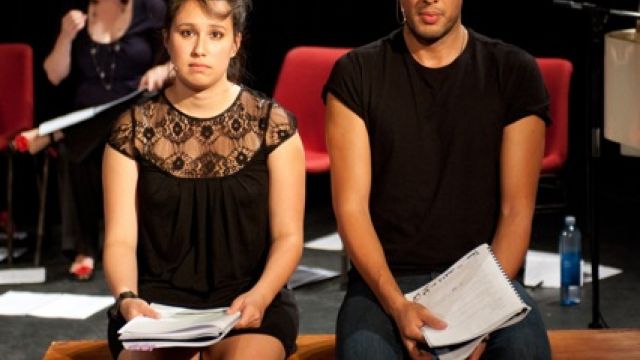 Sydney-based musical theatre development initiative New Musicals Australia held its inaugural workshops during March. Two new Australian musicals, a.voidand A Little Touch of Chaos (by the writers of The Hatpin) were workshopped, culminating in showcase performances, while eight other new musicals were shown to industry panels in shorter presentations.

Neil Litchfield spoke to Neil Gooding (director) and James Millar (writer) of A Little Touch of Chaosabout the workshop.

I began by asking director Neil Gooding how the workshop process for A Little Touch of Chaosworked.

NG: With A Little Touch of Chaos, we basically had five days. The Australia Council funding was for workshop and development. That’s the important stage that I believe is missing in Australian Musical Theatre. Too often shows are only worked on when they’re going into a performance. That’s just not the same process as being able to sit in a room with the material and workshop and develop it without the pressure of knowing you have a paying audience a couple of weeks down the line.

We spent the first three days learning the material and discussing the piece, so that at the end of day three we were able to sit in the room and read and sing through the entire piece. That then left us an entire afternoon to as director, musical director and cast of very intelligent actors, to discuss the piece and talk about things that were or weren’t working, or whether there could be tweaks.

We had James Millar, the writer, there, so he was able to give input and listen to feedback instantaneously.

Then the next two days we started putting it on its feet in a very simple format so that we could move toward the presentation. That presentation allowed us to learn a lot of stuff as well about things that we thought were funny, but weren’t as funny in front of an audience, or vice versa, songs that connected or didn’t connect.

Even in a week we made a lot of changes; we probably cut three songs, and put another one in place of an old one.

NL: Elsewhere in the world this wouldn’t be considered unusual, would it?

NG: Basically New Musicals Australia isn’t trying to recreate the wheel. These kind of programmes are totally necessary to the very complex art form of the musical. There are lots of areas that it can go wrong in, and needs to be tested out in workshopped prior to having audiences.

The two big hubs of musical theatre are London and New York, and particularly in New York there’s just an endless cycle of development of musicals. Kris Stewart, who runs New Musicals Australia, set up the New Yourk Music Theatre Festival, so it’s not that we’re trying to set up any new programs globally, but to introduce what happens in the really structured markets like New York, into Australia, where we have had very little history of workshopping and development.

NL: What do you think you achieved with A Little Touch of Chaos during the workshop?

NG: The piece had been commissioned for the entire second year class at WAAPA, which meant that under that structure Peter (Rutherford) and James had to write a show that included as many as sixteen people, and basically they tried to give everybody a song at some point. Part of the process for us was taking what was a very promising work there, and fine-tuning it into a show that didn’t have that set of conditions, in fact reducing it down to a cast of nine. We got rid of a few of the songs that had been written specifically to give songs to people at WAAPA that weren’t really taking the show forward. Really the best thing was that it gives everybody the chance, particularly the writers, to have ten very intelligent pairs of eyes on their piece, and to offer feedback. James Millar is very good at taking feedback and listening to it, and some of the ideas helped to springboard an entire song into the show, or cut an entire scene, or rewrites. So the piece was certainly fine-tuned and streamlined down. Judging by the presentations, it’s turning into a very interesting and emotional, unique piece of musical theatre.

In the ideal world this piece will have another workshop period. The classic quote is that musicals are never written, they’re just re-written. That’s where this one is now. James will take the videos from the workshop and sit down with his composer, Peter Rutherford, and the two of them will take what was learnt from those workshops and start re-writing, cutting, and putting new songs in, again. That new version needs to be tested again, and from there, it’s going to be getting close to the finished product that can be rehearsed ready for staging.

Where it’s going to be produced is the next big problem in Australian musical theatre, particularly for a piece like this. It’s hard, even if you’ve got a very commercial piece, it’s very hard to get Australian musicals produced. This musical, I think, sits somewhere in the territory that needs the support of a subsidised theatre company, and Australia has very limited options as to which ones would do it or wouldn’t do it. 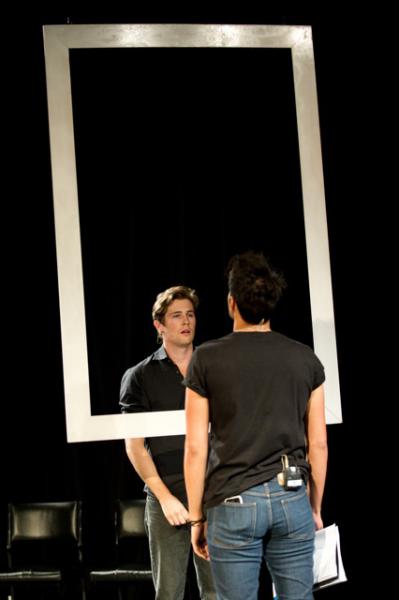 Speaking to writer James Millar, I asked about the experience of sitting in a room listening to other people’s opinions of his work.

JM: Ever since we started writing The Hatpin, that’s been my favourite part of the process of writing a musical. You can sit for ages and write the story the way you want to tell it, but that’s where you hear the community of artists, or audience, share an opinion that informs and changes the work. I never feel intimidated by hearing people’s thoughts, and I do love using them.

NL: Tell me a little from your perspective about how the work developed in that week?

JM: Originally the work was commissioned by WAAPA for the second year Musical Theatre student to perform. From that production over in Perth, Peter Rutherford and I continued to make the changes that we wanted to after seeing it in front of an audience. What we got to do was use the week at New Musicals Australia to see if those changes had worked, but I also made a whole stack of new discoveries with those actors. The script went from being 125 pages long to 93, we got two new songs and lost three, and four of the scenes were rewritten. It was a major re-writing time, all done in this great pressure cooker. It was hair-raising, but totally productive.

NL: What was the most exciting thing you discovered?

JM: We had cut a song that we really loved, Let’s Run Away, because we didn’t think it was necessary in the piece. Throughout the week everyone was saying we need to see some romance between these two characters before a certain major plot point happens, and we found a completely different spot in the show to put the song, where it fitted beautifully and worked a treat. It changed the entire nature of Act 1. It was sort of fun and fated, and I like that part.

NL: How valuable has the workshop been, and how much further does the show have to go?

JM: Hugely useful. Just to see that quality of actor read the script was absolutely brilliant. In terms of how much work there is left to do on it, I think that the collected notes we got from people that fed back, and this is one of the best things about workshopping, were all consistent with each other. When you get consistent feedback about one or two elements of the show, you know that’s something to address.

Without places like New Musicals Australia we have no facility to develop things.If you’re lucky enough to complete writing a show, and someone picks it up, and it’s not workshopped, you get put up against other things which have come from America after months and months of creative workshops and you’re judged on the same criteria, when what you’re really seeing is an early draft. So, may New Musicals Australia live a long and healthy life.